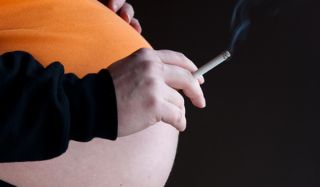 Women who smoke during pregnancy risk harming their future child's coordination and motor abilities, especially those of boys, a new study suggests.

The dangerous effects of smoking during pregnancy are already widely known babies are more likely to be born prematurely or with low birth weight, and are up to three times more likely to die from Sudden Infant Death Syndrome (SIDS), according to the Centers for Disease Control and Prevention. However, 13 percent of U.S. women still smoke during their last three months of pregnancy, according to 2004 data from the CDC.

Researchers from Örebro University in Sweden wanted to test the impact smoking has on children's well-being including their motor control. They followed the medical records of 13,000 British children born during the same week in 1958. They also recorded the mothers' smoking habits.

When the children were 11, doctors tested their motor-control skills by asking them to pick up 20 matches with both their right and left hands while being timed. They were also asked to check off 200 squares and copy a simple figure while being timed, according to the study.

Children with mothers who smoked up to nine cigarettes a day during pregnancy had a harder time completing the tests, especially when using their non-dominant hand, the researchers said.

They found boys were more affected than girls by smoking. This may be because nicotine interacts directly with testosterone during the fetal stage, the study said, making boys more susceptible to fetal nicotine exposure.

It's possible that smoking harms motor ability because nicotine interacts with acetylcholine, an important chemical messenger that helps with brain development in the fetus. A woman's smoking can also lead to fetal malnutrition, the researchers said.

The study was published today (Sept. 22) in the Journal of Epidemiology and Community Health.