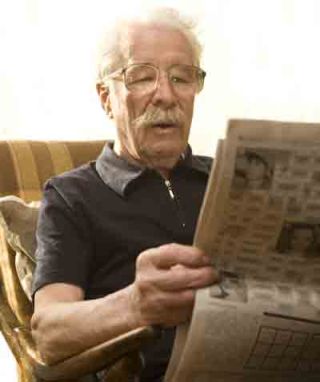 Older people choose to read negative news about young adults rather than positive news when given a choice, at least in Germany. It gives the seniors a boost in self-esteem, researchers say.

The study also found that younger people prefer not to read about older people at all.

These results come from a study of 276 Germans who were asked to read what they thought was a test version of an online magazine featuring carefully selected stories about younger and older people.

Our results bolster the argument that people use the media to enhance their social identity, said Silvia Knobloch-Westerwick, lead author of the study and associate professor of communication at Ohio State University.

Older people and younger people have different goals when they use the media, and it shows in what they choose to read.

Younger people, who are less certain about their own identity, prefer to read about other younger people to see how they live their lives, Knobloch-Westerwick said.

Older people, on the other hand, have greater certainty regarding their identity. However, living in a youth-centered culture, they may appreciate a boost in self-esteem. That's why they prefer the negative stories about younger people, who are seen as having a higher status in our society.

Knobloch-Westerwick conducted the study with Matthias Hastall of Zeppelin University Friedrichshafen in Germany. Their results appear in the September 2010 issue of the Journal of Communication.

The study included 178 younger adults (18 to 30 years old) and 98 older adults (50 to 65 years old). All came to a computer laboratory, where they were told they were testing an online magazine that was not yet available to the public.

The experimental magazine was created specifically for the study and contained 10 carefully pre-tested stories. Each story focused on one individual, but there were two different versions: one that had a negative spin and one with a positive spin (each participant was offered just one of the two versions).

Participants in the study were told they would not have time to read all the stories and were asked to click on the stories that they found interesting. Each was given a random mix of positive and negative stories about younger and older people.

The computer secretly logged which stories each participant clicked on and how long they spent reading each article.

Older people have greater certainty regarding their identity. However, living in a youth-centered culture, they may appreciate a boost in self-esteem. That's why they prefer the negative stories about younger people, who are seen as having a higher status in our society.

Results showed that the older participants were more likely to select negative articles about younger people, but they did not show a strong preference for either positive or negative stories about people in their own age group.

Younger people showed low interest in articles about older individuals regardless of whether the stories were positive or negative. They did choose to read more positive stories about their own age group than they did negative stories, she said.

After participants finished browsing and evaluating the online magazine, they were given a short questionnaire aimed at measuring their self-esteem.

Results showed that younger people showed no differences in self-esteem based on what they had read. However, the more that older people read negative stories about younger individuals, the higher the older people's levels of self-esteem tended to be.

This study came about because a previous study by the same researchers, using this same data, had produced unexpected results, Knobloch-Westerwick said. The original study had hypothesized that people prefer media messages that portray people like themselves people of the same age and the same gender, in this case.

Now we know why older people liked reading about the younger people they were looking for negative stories about them, she said.

Our new results go along with other research showing that people's social identity helps shape what media messages we choose. Age is just one type of social identity which may affect our media choices.