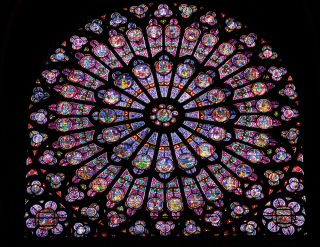 Most of us have heard the story: Medieval cathedrals have window glass that's thicker at the bottom than at the top.

That happens, we were told, because glass is a liquid at room temperature, and over the centuries, it slowly flowed downward.

But recently, scientists examined a sample of 20-million-year-old Dominican amber, a naturally occurring glass. They found that the structure of the amber did not change with stress or heat any more than a newer sample would. What's going on?

A quick physics lesson: The difference between a solid and a liquid has to do with its molecular structure. A solid has regularly arranged molecules in a crystalline structure. As a solid is heated, its molecules vibrate until the solid reaches its melting point and its crystal structure breaks down.

Liquids become solid when they lose enough heat. Sometimes, a liquid is "supercooled" if it remains a liquid beyond its normal freezing point.

After looking at bottom-heavy medieval windows, some observers claimed that glass is a supercooled liquid because it's solid, but is still flowing. In fact, glass is neither a liquid nor a solid, but a state in between known as an amorphous solid.

Glass "is not as organized as a crystal, because it did not freeze, but it is more organized than a liquid," according to Scientific American. Because glass is an amorphous solid, "it would take longer than the universe has existed for room-temperature cathedral glass to rearrange itself to appear melted."

Indeed, even much older glass artifacts from ancient Roman and Egyptian ruins show no signs of melting over the centuries, according to researchers.

Medieval windows are thicker in spots due to the way they were made, not because the glass is a liquid, scientists say. The windows were created by glassblowers who made glass cylinders that were then flattened into panes.

The flattening was uneven, and the thicker parts were installed on the window bottoms — probably because, otherwise, the glass would be top-heavy and less stable.