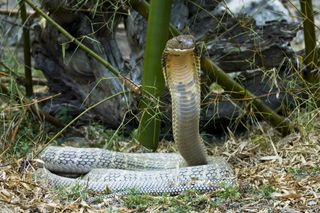 The king cobra is one of the world's most venomous snakes.
(Image: © Heiko Kiera | Shutterstock)

Of the more than 600 species of venomous snakes found on Earth, only about 200 can do any real damage to humans, according to the World Health Organization. Here are six of the deadliest snakes on the planet:

This viper, Echis carinatus, which inhabits parts of India and the Middle East, doesn't possess the strongest of venoms, but is responsible for more human deaths annually than any other snake, partly because it's often found in populated areas.

Wondering which snake can bring down an elephant? The king cobra (Ophiophagus hannah) delivers enough neurotoxins to kill an Asian elephant, as well as about 50 percent of the humans it bites. Reaching 18 feet (5.5 meters) in length, the king cobra is also the world's longest venomous snake.

This deadly snake (Notechis scutatus) inhabits southern Australia and Tasmania, and kills victims with a potent mixture of neurotoxins, coagulants, hemolysins and myotoxins. Interestingly, these snakes vary greatly in size depending on their preferred type of prey.

This reptile (Oxyuranus microlepidotus) is often referred to as the "fierce snake," and its bite can kill a human being in less than an hour. One of the deadliest snakes on the planet, its paralyzing venom causes hemorrhaging in blood vessels and muscle tissues.

Many believe this water snake to be the most venomous snake in the world. The bite of Hydrophis belcheri is said to be 100 times more deadly than that of its compatriot, the inland taipan. Luckily, this Indian and Pacific Ocean native is rarely known to bite humans.

The fastest snake in the world is also one of the deadliest. The black mamba (Dendroaspis polylepis) can move at speeds of up to 12.5 miles per hour (5.5 meters per second), and its bite can kill a human being in less than 30 minutes. This snake is known for using its lethal fangs to repeatedly stab those unfortunate enough to get in its way, with each bite injecting a deadly amount of neurotoxic venom.