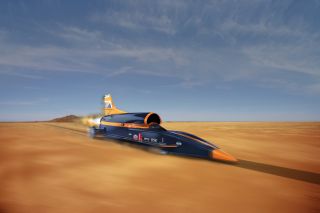 The Bloodhound SSC is designed to exceed 1,000 mph and become the world
(Image: © Curventa and Siemens)

The world’s fastest car is split into two categories: production cars and racing vehicles that can’t be driven on streets.

For production cars, the fastest in the world is the Bugatti Veyron 16.4 Super Sport. In 2010, the Bugatti was speeding at 268 mph (which is dreadfully over the speed limit on the world’s highways). According to Guinness World Records, the car clocked the time at the Volkswagen proving grounds in Ehra-Lessien near Wolfsburg, Germany. The Bugatti is also the fastest production car to reach 100 km/h from rest, with a time of 2.5 seconds.

Even though the Bugatti is technically a production car, it’s not widely available. The production run consisted of only 30 cars — of which only five, named the Super Sport World Record Edition, are capable of 268 mph. The other 25 Super Sport cars are electronically limited to 258 mph, which must be a complete bummer for their drivers. The base price for these fast cars is $2.4 million.

Currently, Andy Green, a retired air force pilot who clocked the fastest recorded speed in 1997 at Black Rock Desert, Nevada, holds the world land speed record. Careening through the desert at 763 mph, Green became the to reach supersonic speed on land. The car is known as the ThrustSSC, and used a turbine gas engine (turbofan) by Rolls Royce, the recognized leader in aircraft engineering.

But watch out — another “car” known as the Bloodhound SSC (SuperSonic Car), which looks more like a space shuttle than a car, is designed to exceed 1,000 mph. The rocket-powered Bloodhound goes so fast that it can’t roll on tires. Instead, the car runs on 200-pound circles of aerospace aluminum that can absorb 50,000 times the force of gravity. The car hasn’t fully been tested yet, but it will be driven, er, piloted by record-holder Andy Green.