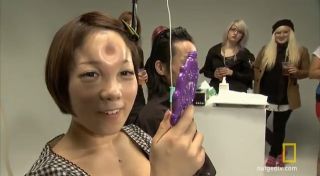 If you thought Japan's extreme fad culture would stop short of people injecting saline into their foreheads to make it look like they have bagels implanted under their skin, you were wrong. Being a "bagel head" is, indeed, currently in vogue in Tokyo.

The bizarre body modification procedure, which was highlighted in a Sept. 23 episode of "Taboo," a show on the National Geographic Channel, involves injecting about 13.5 ounces (400 milliliters) of saline into a person's forehead to form a huge welt, then pressing a thumb into the welt to create an indent. The process takes two hours, and the trendy swelling goes down in under a day.

Questions about what is going through these people's bagel-shaped heads aside, is this fad dangerous?

Potentially, says Omar Ibrahimi, a dermatologist at the Connecticut Skin Institute and visiting assistant professor at Harvard Medical School, who has had experience injecting saline solution into bodies during cosmetic procedures. The risks of bagel-heading are threefold, Ibrahimi said.

First, the body can safely absorb normal saline solution injected under the skin, and doctors sometimes use it as a form of local anesthesia; however, "saline solution that is too concentrated can overload the body's capacity to process salt," Ibrahimi told Life's Little Mysteries. If a naive bagel head were to accidentally use highly-concentrated hypertonic saline solution instead of the normal kind, for example, he or she could experience extreme dehydration of the kind that happens when you drink salt water.

Secondly, if the saline solution isn't sterile, there's "a lot of risk of bacterial or fungal infection," Ibrahimi said. Most of the pathogens commonly found in unsterilized water can be killed off by the immune system when ingested into the digestive tract; however, the pathogens have a higher chance of gaining a foothold when escorted directly beneath the skin, such as during bagel-head surgery.

Water contamination is also one of the lesser-known risks of getting a tattoo. Just last month, the use of unsterile water as a diluting agent in tattoo ink resulted in a spate of bacterial infections across four U.S. states. Such infections cause painful rashes that can last months, requiring strong antibiotic regimens and sometimes surgery to eradicate.

But even perfectly sterilized saline solution of the ideal concentration could leave bagel heads deeply regretting their ultra-fashionableness. And considering that this last risk is aesthetic, it might make more headway in putting an end to the trend.

"I'd be worried that if people did this repeatedly you might actually, indeed, stretch the skin beyond its normal elasticity, and this could cause permanent laxity," Ibrahimi said.

In other words, bagel heads could become deflated-bagel heads: a fashion mishap in anybody's book.