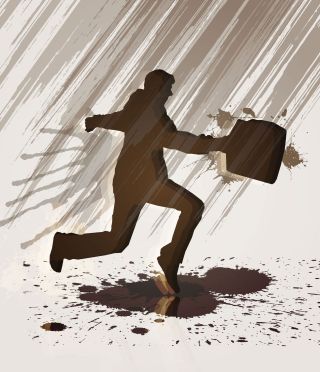 Running in the rain is usually best.
(Image: © Image via Shutterstock)

When you're caught in a downpour with no umbrella, should you run or walk? Running will get you out of the rain faster, but at the risk of encountering more drops along the way — and therein lies the dilemma. Now, science gives the go-ahead: in most cases, run.

Running as fast as you can is usually the best way to minimize wetness, according to Franco Bocci, a professor of engineering at the University of Brescia in Italy. Reporting in the European Journal of Physics, Bocci has shown that the optimal travel speed varies depending on how thin you are, the wind speed, raindrop size and the angle between your path and the wind direction. Certain combinations of these factors set an optimal travel speed, which may occasionally be slower than a flat-out sprint.

However, in a pinch, just go for it.

"Let's say that in general, the best thing is to run, as fast as you can —  not always, but in general," Bocci told BBC News. "If you're really thin, it's more probable that there will be an optimal speed. Otherwise, it's better to run fast."

There are a few easy-to-identify exceptions worth remembering. If the wind is blowing in the direction you're traveling, attempt to jog at a speed equal to the wind speed. That's the pace at which you feel the least wind (and rain) smacking against you. [Why Does a Breeze Feel Cool?]

If the wind is hitting your back at an angle, jog a little faster than you think it's blowing. (The larger the angle, the more you should hustle.)

Bocci's calculations follow a long tradition of physicists attempting to address the complex problem of optimal travel strategies during rainfall. Whereas past efforts have tended to simplify the problem, and consequently, have produced simple answers, Bocci says his work reveals how complicated the running versus walking dilemma really is — and he says the answer will become more complicated the more factors physicists take into account.

But as far as you're concerned, run, don't walk, to the nearest cover. Or, carry an umbrella.