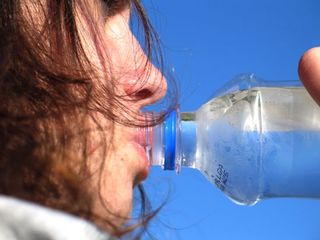 Our bottled water habit has a huge environmental impact, including the amount of energy it takes to make the plastic bottles, fill them and ship them to thirsty consumers worldwide.

A new study breaks down just how much energy is used at each step of the process.

An estimated total of the equivalent of 32 million to 54 million barrels of oil was required to generate the energy to produce the amount of bottled water consumed in the United States in 2007, according to the study, detailed in the January-March issue of the journal Environmental Research Letters. Of course, this is but a third of a percent of the energy that the United States consumes as a whole in a year.

In 2007, the last year for which global statistics were available, more than 200 billion liters of bottled water were sold around the world, mostly in North America and Europe. The total amount sold in the United States alone that year (33 billion liters) averages out to about 110 liters (almost 30 gallons) of water per person, according to the Beverage Marketing Corporation.

Since 2001, bottled water sales have increased by 70 percent in the United States, far surpassing those of milk and beer. Only sodas have larger sales.

The energy required to produce bottled water is particularly of interest now, at a time when many nations are looking for ways to reduce their energy use and associated climate impacts.

Peter Gleick, president of the Pacific Institute, a nonpartisan research institute, and his colleague Heather Cooley recently realized that no one had done a comprehensive survey of the energy use involved in the complete production cycle of bottled water, so they took on the task.

The energy use breaks down into roughly four parts of the production cycle: that used to make the plastic and turn it into bottles, to treat the water, to fill and cap the bottles, and finally to transport them.

"Energy is used in a lot of different phases," Gleick said.

Most plastic bottles are made of polyethylene terephthalate (PET). Little pellets of PET are melted and fused together to make the bottle mold. Gleick and Cooley estimated that about 1 million tons of PET were used to make plastic bottles in the United States in 2007, with 3 million tons used globally; the energy used to produce that global amount of PET and the bottles it was turned into was equivalent to about 50 billion barrels of oil, they found.

(Some companies have been shifting toward using lighter-weight plastics for their bottles, which reduces the amount of PET produced by about 30 percent and would therefore lower the amount of energy required to make them. The transition to less energy-intensive plastic is slow though, and not all companies use them.)

The amount of energy involved in that first step was a surprise to Gleick: "I didn’t know how much energy it takes to make plastic or turn plastic into a bottle," he told LiveScience.

The energy required to treat water is substantially less and depends on how many treatments are used on the water and doesn't account for the bulk of the energy spent in production. Likewise, the energy used to clean, fill, seal and label the bottles is only about 0.34 percent of the energy built into the bottle itself.

The energy used to transport the bottled water depends mainly on how far it is shipped and what transportation method is used. Air cargo is the costliest energy method, followed by truck, cargo ship and rail shipping, in that order. A different study on the carbon footprint of wine also found this breakdown of energy use for transportation methods.

The final tally of 32 million to 54 million barrels of oil may be only about a third of a percent of the total U.S. energy consumption, but it could be considered an "unnecessary use of energy," Gleick said. (Roughly three times as much oil would have been needed to produce the global amount of bottled water consumed.)

The amount is 2,000 times more than is required to make tap water, "and we live in a country where we have very good tap water," Gleick said.

Gleick said that the purpose of the study was not to propose that bottled water be banned, but to help consumers "understand the implications of our choices." With the information on the energy impacts, "we may choose to do different things as individuals," he added.

Understanding the energy costs of the process also sheds light on the greenhouse gases that energy use emits. "Energy is sort of the first piece of the puzzle," Gleick said.