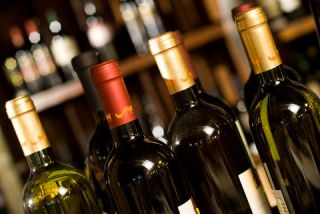 NEW YORK — While sipping a glass of wine one evening, wine enthusiast Tyler Colman began to think about the impact that particular wine, which happened to come from South America in a particularly heavy glass bottle, had on the environment.

That thought prompted him to begin examining wine production, from vineyard to wine glass, and "how the path that wine takes to get to us contributes to the carbon footprint of wine," he said at a lecture on wine and climate change here recently at the American Museum of Natural History in New York.

Wine enthusiasts such as Colman and winemakers are increasingly becoming aware of the impact their favorite beverage has on the environment, from the pesticides and fertilizers used to grow wine grapes, to the greenhouse gases released while transporting the wine from the vineyard to often far-reaching locales.

Colman, who teaches classes on wine at New York University and the University of Chicago and blogs as "Dr. Vino," enlisted the help of sustainability expert Pablo Päster of ClimateCHECK to calculate the carbon footprint of wine, in terms of both its production and transportation. Their findings were published as an American Association of Wine Economists working paper in October 2007.

Starting with the grapes on the vine, the first source of carbon dioxide and other greenhouse gases are the chemical fertilizers some wine growers use to nourish their plants. On a global scale, fertilizers are an important contributor to greenhouse gas emissions, but for wine production, they don't have much of an impact, Colman and Päster found.

"I was expecting that to be a big part of it, but it really is not," Colman said.

Grapes don't require the copious amounts of fertilizers to grow that other crops such as corn do, Colman explained, making them a minor proportion of wine's overall footprint. (Fertilizers, along with pesticides, can still pollute the local environment though, and some wine producers are moving to more organic wine-growing practices.)

Likewise, the carbon dioxide released from the fermentation of wine grapes makes up an insignificant percentage of the total emissions associated with wine production.

It turns out that the biggest source of greenhouse gases from wine, Colman and Päster found, was actually in transporting wine to the consumer.

Because wine is only produced in specific regions of the world, be it Bordeaux or Napa Valley, it must often be transported long distances to reach wine drinkers. This is particularly true in the United States.

"More than 95 percent of the wine in America is made on the West Coast, but more than two-thirds of the population lives east of the Mississippi, so there's just a lot of transportation that has to occur just to get the wines to the consumers," Colman told LiveScience.

Most of the West Coast wines are shipped east by truck, which results in a large carbon footprint.

Comparing the emissions factors of different transportation methods, Colman and Päster found that air cargo was the worst, followed by trucking, with container shipping by sea having the lowest impact (five times less than trucking and 11 times less than air cargo).

These differences in emissions factors mean that distance isn't always the key factor in determining which wine has the lowest footprint for a given location. If you live in San Francisco, you can get your wine from the many California vineyards; but if you live in New York, it may be more environmentally friendly to buy wine sent by container ship from Bordeaux to a port in New Jersey than to buy American with a wine from Napa Valley, which would be trucked across the country.

A wine shipped straight from Bordeaux would have to be trucked to Columbus, Ohio, before it matched the greenhouse gas impact of a Napa Valley wine trucked to the same point. This is known as the breakeven point between the two wines, and Colman and Päster actually calculated a "green line" down the middle of the United States that marks the point at which a shipped wine and trucked wine would have the same carbon footprint.

Miles and transportation method aren't the only consideration though, as packaging can influence transportation efficiency. Transporting heavy glass bottles uses much more fuel, and therefore has a bigger impact, than lighter glass or other alternative packaging, which some winemakers are turning to.

"You're starting to see more wines coming out now in alternative packaging — bag-and-box format, box tetrapack, boxed wine, and even some distributors now are producing wines in plastic bottles — and the only reason is because it's lighter," Colman said.

(Despite the stigma of boxed wines, Colman said he thinks they can gain acceptance because they also give the consumer more bang for their buck, as he wrote in a New York Times op-ed this summer.)

Of course, wine's carbon footprint pales in comparison to other factors, such as electricity generation, and even to other agricultural products, such as corn. But Colman thinks it's still important to think about the impact our activities have on the planet.

"Wine is relatively small, but I don't think that invalidates talking about it, because I think that for a couple of reasons, it helps us consumers think about that everything that we do has a carbon footprint, even something as small as having a glass of wine," he said.