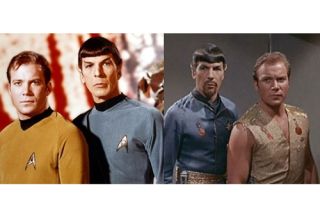 Kirk and Spock as we know them, and their evil twins from a parallel universe in the original "Star Trek" series episode "Mirror, Mirror."
(Image: © Paramount Television)

In science fiction — a genre founded on the question "what if?" — one of the most versatile narrative devices out there is the parallel universe.

The people, places and things familiar to a character, as well as the history behind them, can be re-jiggered in any number of ways in these alternate realms. Perhaps the Nazis win World War II, as Philip K. Dick posited in "The Man in the High Tower." Or terrifying monsters — not borne of our own universe's earthly evolution — might stomp through strange jungles. Manhattan could be spelled with a single "t", as it is on the television show "Fringe," among countless other differences between its "prime" and parallel universe.

Parallel universes sound like they beggar belief. Yet their existence appears not only possible but as an inevitability of certain mathematical and theoretical considerations. According to theories such as quantum mechanics and the inflation of the early universe, scientists have ample reason to think there really is a "multiverse" of realties.

"The tools that we've found to understand the nature that we do see around us cause us to transcend the observable universe into some wild speculations," said Andreas Albrecht, professor of physics at the University of California, Davis.

One derivation of parallel universes comes from the kookiness of quantum mechanics. At subatomic scales, particles do not act in a concrete, there-or-not-there manner that we are accustomed to in our spatial environments. Instead, and bizarrely, particles possess various physical properties and occupy multiple positions. None of these characteristics can be known beyond a certain probability range until the particle is observed. [The Mysterious Physics of 7 Everyday Things]

Accordingly, particles exist in a fuzzy "wavefunction" of probable states. Although a measurement nails down one of these multiple possible states, it is thought that other possible values "branch off" into their own universes.

"Through quantum mechanics, there is an idea that there are many possible outcomes and those are represented in the wavefunction," Albrecht said. Some scientists regard those different outcomes as different parallel universes.

According to this "many-worlds interpretation" of quantum mechanics, all the alternatives are equally real, though we experience only one particular outcome. The "Star Trek: The Next Generation" episode "Parallels" shows what it might be like to consciously hop among the other possibilities: A chocolate cake in one world is a yellow cake in another, and a painting appears on an opposite wall from where it had been.

Another universe over yonder

"Star Trek" episodes aside, this phenomenon of quantum mechanical branching does not yield a multiverse that we can conceive of in tangible, observable, three-dimensional space. But according to a major part of the Big Bang theory known as inflation, other universes might physically border our own, much like soap bubbles in suds.

Inflation proposes that around 10-36 seconds into the Big Bang, space itself underwent a brief period of exponential expansion. The concept offers an explanation for various characteristics of our universe, including its shape and the smooth distribution of matter.

Some frameworks of inflation suggest parts of the universe would keep on inflating forever, creating so-called pocket universes separate from each other. "The mechanism of inflation gives you different universes," Albrecht said.

Collisions between our universe and other pocket universes might leave an imprint on our sky. Cosmologists have turned up circular patches in the cosmic microwave background radiation, the leftover glow from the Big Bang, consistent with the idea that universes bump together.

"The signals are not strong enough to prefer a theory with bubble collisions over the standard cosmological theory," said Stephen Feeney, a cosmology Ph.D. student at University College London, "but we're developing tools to look for bigger signals."

In theory, if one could somehow travel across tens of billions of light years to the "edge" of our universe, one could then attempt a crossover into another pocket universe. "There would be some sort of domain wall that separates each bubble," Feeney said.

What might other pocket universes be like? Some could have their own unique physics, with stronger and weaker forces of nature than what we're accustomed to. Even more mind-bogglingly, eternal inflation models call for an infinite number of universes within a multiverse. Every solution to random distributions of matter, therefore, would be realized, and an infinite number of times over.

As a result, a multiverse would mean that, somewhere out there, your doppelgängers are also at their computers, perhaps reading this very same article. "One of the things that comes up in eternal inflation is that there are many copies of you," Albrecht said.

However a multiverse might manifest itself, Albrecht does not think it would do so in a "sci-fi- friendly way." That is, physically traveling to and accessing adjacent pocket universes — should they exist — would require extraordinary breakthroughs in propulsion technology, among other astounding technological leaps. [Top 10 Inventions that Changed the World]

Branching quantum realties would by definition remain distinct, as two outcomes of the same event cannot coincide. Some researchers have suggested that the constant quantum splitting of the universe could permit time travel to occur, as the act itself would just spawn off another parallel world.

Overall, much theoretical and observational work remains to be done in validating the fanciful concept of parallel universes. As Albrecht told Life's Little Mysteries: "It's a cool or cruel fact of physics, depending on how you look at it, that it drags you beyond this comfortable place where you think you can just come to grips with the universe." (Let alone a multiverse.)

Plausibility score: Physics churns out parallel universes with ease, but accessing or having aspects of alternative realms invade our universe appears to be the stuff of fantasy. On balance, plausibility-wise, we give the sci-fi concept two out of four rocketboys.