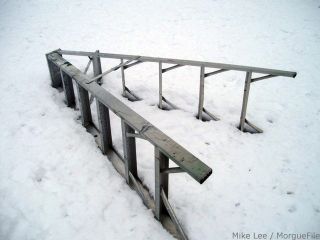 The first came last month. The next is in November. Such a rare triple-threat occurs only once every 11 years.

The origin of the link between bad luck and Friday the 13th is murky. The whole thing might date to Biblical times (the 13th guest at the Last Supper betrayed Jesus). By the Middle Ages, both Friday and 13 were considered bearers of bad fortune. In modern times, the superstition permeates society.

Here are five of our favorite Friday-the-13th facts:

1. Fear of Friday the 13th — one of the most popular myths in science — is called paraskavedekatriaphobia as well as friggatriskaidekaphobia. Triskaidekaphobia is fear of the number 13.

2. Many hospitals have no room 13, while some tall buildings skip the 13th floor and some airline terminals omit Gate 13.

3. President Franklin D. Roosevelt would not travel on the 13th day of any month and would never host 13 guests at a meal. Napoleon and President Herbert Hoover were also triskaidekaphobic, with an abnormal fear of the number 13.

4. Mark Twain once was the 13th guest at a dinner party. A friend warned him not to go. "It was bad luck," Twain later told the friend. "They only had food for 12." Superstitious diners in Paris can hire a quatorzieme, or professional 14th guest.

5. The number 13 suffers from its position after 12, according to numerologists who consider the latter to be a complete number — 12 months in a year, 12 signs of the zodiac, 12 gods of Olympus, 12 labors of Hercules, 12 tribes of Israel, 12 apostles of Jesus, 12 days of Christmas and 12 eggs in a dozen.

Meanwhile the belief that numbers are connected to life and physical things — called numerology — has a long history.

"You can trace it all the way from the followers of Pythagoras, whose maxim to describe the universe was 'all is number,'" says Mario Livio, an astrophysicist and author of "The Equation That Couldn't Be Solved" (Simon & Schuster, 2005). Thinkers who studied under the famous Greek mathematician combined numbers in different ways to explain everything around them, Livio said.

In modern times, numerology has become a type of para-science, much like the meaningless predictions of astrology, scientists say.

"People are subconsciously drawn towards specific numbers because they know that they need the experiences, attributes or lessons associated with them, that are contained within their potential," says professional numerologist Sonia Ducie. "Numerology can 'make sense' of an individual's life (health, career, relationships, situations and issues) by recognizing which number cycle they are in, and by giving them clarity."

However, mathematicians dismiss numerology, saying it lacks any scientific merit.

"I don't endorse this at all," Livio said, when asked to comment on the popularity of commercial numerology. Seemingly coincidental connections between numbers will always appear if you look hard enough, he said.