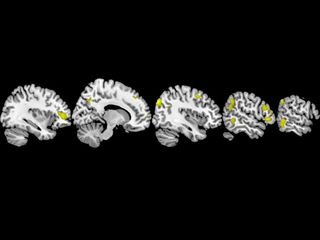 Brain areas activated by considering how involved God (or another perceived supernatural entity) is. These are areas that also help us understand the intentions of others and the emotional significance of these intentions.
(Image: © D. Kapogiannis)

Science can't say whether God represents a loving, vengeful or nonexistent being. But researchers have revealed for the first time how such religious beliefs trigger different parts of the brain.

Brain scans showed that participants fell back on higher thought patterns when reacting to religious statements, whether trying to figure out God's thoughts and emotions or thinking about metaphorical meaning behind religious teachings.

"That suggests that religion is not a special case of a belief system, but evolved along with other belief and social cognitive abilities," said Jordan Grafman, a cognitive neuroscientist at the National Institute of Neurological Disorders and Stroke in Bethesda, Maryland.

Such results fit with previous research which shows that no single "God spot" exists in the brain. Both believers and nonbelievers participated in the new study, detailed in this week's issue of the journal Proceedings of the National Academy of Sciences.

A first part of the study established a range or spectrum of religious beliefs relating to God's perceived involvement in this world, God's perceived emotion, and personal experiences as opposed to abstract doctrine. The second part examined how participants responded to religious statements reflecting those beliefs, with the help of fMRI scanners.

The brain scans showed that people use known, higher-function brain regions to sort out their thoughts on God and religion. For instance, parts of the brain linked with theory of mind (ToM) lit up when trying to understand a supposedly detached God's intentions – although individual minds varied wildly when pondering a more involved God.

A possible explanation: "Probably because we would tend to use theory of mind when we were puzzled, concerned, or threatened by another’s behavior," Grafman told LiveScience.

People again relied on theory of mind, as well as brain regions that detect emotion through facial expression and language, when they read statements reflecting God's anger. Statements of God's love stimulated regions connected with positive emotions and suppression of sadness

Unsurprisingly, statements of religious doctrine activated parts of the brain that help decode metaphor and abstractness. That contrasted with statements reflecting religious experience, which prodded the brain to retrieve memories and imagery of self in action.

Even statements that believers or nonbelievers disagreed with produced intriguing results.

"Reading a statement that you have been asked to compare your own personal beliefs with certainly will activate your own belief system," Grafman pointed out. He and his colleagues observed brain regions relating to disgust or conflict lighting up in response.

One question that remains unanswered is whether religion evolved as a central functional preoccupation for human brains in early societies, or whether it simply relied on brain regions which had evolved for other types of thought-processing.

Future research may also try to see if human brains respond similarly for different religions, given that this study focused only on Western Christian beliefs.

"The more interesting studies will wind up comparing different belief systems with similar dimensions to see if they also activate the same brain areas," Grafman said. "If they do, we can better define why those brain areas evolved in humans."