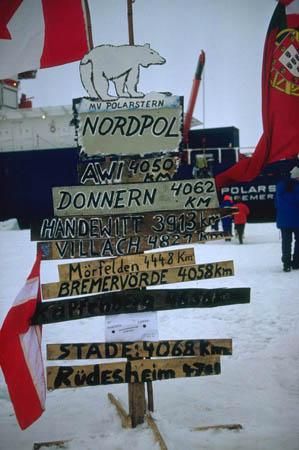 Northpole-sign, setup by the crew and scientists of the German research vessel POLARSTERN during her visit at the North Pole on 6.th Sept. 1991.
(Image: © Hannes Grobe)

Traveling to the snow- and ice-covered top of the world is not as simple as pointing a flying-reindeer-powered sleigh due north. Since 1926, when the first confirmed expedition to the North Pole arrived via dirigible, explorers have made the arduous journey by nuclear submarine, snowmobile and even dogsled. Since 2000, however, scientists from the North Pole Environmental Observatory (NPEO) have used a more ubiquitous mode of travel: the airplane.

NPEO researchers travel to the North Pole every April during the short stretch of time when the days lengthen and warm, but the ice remains thick enough to support a plane. During three weeks or so, they monitor the Arctic Ocean to understand its impact on global climate. Cecilia Peralta Ferriz, a physical oceanography graduate student at the University of Washington who has traveled twice with the NPEO, explains the standard route they use to get there in just five steps.

The NPEO team departs from a tiny settlement called Longyearbyen on Norway's Svalbard Islands in early April, but their equipment ships by land and sea around four or five months earlier in two 20-foot-long containers. Instruments include a conductivity, temperature and depth sensor, which measures salinity, temperature and pressure in the water, 30 expandable current profilers, which measure water velocity versus depth, and sundry items such as buoys, anchors and cables.

As for personal gear, temperatures can drop to just a few degrees Fahrenheit, so parkas, snow pants and warm hats are essential. Other necessities include baby wipes (there are no showers), rifles (polar bears are rare because food sources are scarce so far north, but still, safety first!) and something to pass time when the weather is too bad to venture outside, such as a good, long book.

Step 2. Get to Svalbard early

The archipelago lies between the Arctic Ocean, the Barents Sea and the Norwegian Sea several hundred miles north of Norway. It's not a long flight to the North Pole, but planes can't take off unless the weather cooperates: high winds or storms mean no air travel. Team members must arrive a few days ahead of the expected departure and may not leave until several days after.

At the pole, the NPEO scientists bunk at Camp Barneo, which is set up by a Russian team each March and then pulled down in late April, before the ice melts. Campers sleep in 14-person tents that are pumped full of heat from gas-powered generators. Other amenities include a full kitchen, which serves three hot meals a day, and a sauna. At the North Pole, there's a lot of emphasis on warm luxuries.

All of the scientific instruments, fuel and gear combined are too heavy to go on a single flight. So, the team must hopscotch from Svalbard to Barneo several times trips that can get postponed if the weather turns. [Who Was the First Person to Reach the South Pole? ]

The ice that supports Barneo floats on top of the Arctic Ocean and is constantly drifting. This means that the camp may actually move away from the geographical North Pole over time. Those interested in making it all the way must walk, ski, snowmobile or helicopter.

It costs around $10,000 to send each NPEO researcher to the North Pole, so there are no opportunities for volunteers to join. There are, however, tour companies. For skiers, try IceTrek, which offers trips ranging from a single day to three weeks every April. For the less active traveler, Journeys International sends an icebreaker cruise on two-week trips in June and July. Warning: Deep pockets required. Day trips cost nearly $13,500 and longer trips run up to $38,000.