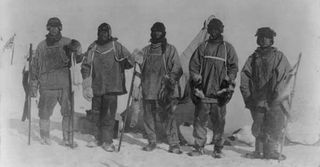 Nationalist competition and a taste for adventure drove explorers to the farthest reaches of the Earth during the 19th and 20th centuries. But that spirit spurred what turned out to be a deadly competition between Norway and England to be the first to plant their flag on the South Pole. Although Norway won the prize, both nations led impassioned treks in the face of punishing environmental obstacles.

The first person to reach the South Pole was Norwegian explorer Roald Amundsen, said Ross MacPhee, a curator in the American Museum of Natural History in New York and author of Race To the End: Amundsen, Scott, and the Attainment of the South Pole (Sterling Publishing, 2010). Amundsen spent 99 days racing Robert Scott, an English naval officer, to the South Pole.

Amundsen, a veteran polar traveler, led a team of 18 men across the frozen continent , finally reaching the pole on Dec. 14, 1912, MacPhee said. Scott and his crew made it to the pole four weeks later on Jan. 17, 1913 but did not make it back alive.

"When [Amundsen] was 15, he said the only thing he wanted to do was be a polar explorer, MacPhee told Life's Little Mysteries. He trained himself in all kinds of ways to become hard as nails. He was a master logistician, and that's why fundamentally he was successful. When they were both on the Ross Ice Shelf [on the Antarctic coast, where the expeditions started], there was no question he would be first."

Amundsen won the race because his team used dog sleds to travel, wore fur clothing and started his run earlier, MacPhee said. Scott, by contrast, had his men haul the gear or used ponies, wore wool clothes and started his expedition too late.

"Scott was insufficiently aware of the conditions he would face , MacPhee said. You have to do everything as quickly as possible at the height of the Antarctic summer. Otherwise, you're a dead man."

And dead men they were. While Amundsen returned home to a hero's welcome, Scott and his team died on their way back from the pole, frozen in their sleeping bags, MacPhee said.