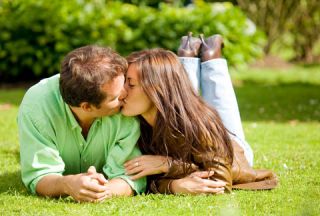 CHICAGO — Go ahead. Kiss the girl. And you might make it a wet one, because scientists who are starting to understand the biochemistry of kisses say that saliva increases sex drive.

Those in the kissing-science field of philematology are finding links between kissing and the hormones that affect coupling, researchers said here today at the annual meeting of the American Association for the Advancement of Science (AAAS). And these hormones are one of the keys to our reproductive success, so there's a link to evolution and passing on our genes to the next generation.

Men also could be using the saliva transfer to assess women's fertility and estrogen cycle, but they might want to be wary of turning women off with too much slobber, she added.

More than 90 percent of human societies exchange smooches, Fisher said. And the behavior is rampant among pygmy chimpanzees and bonobos, some of our fellow primates. Foxes lick each others' faces, birds tap their bills together, elephants put their trunks into one another's mouths. Charles Darwin himself thought that kissing was a natural instinct.

One study found that 66 percent of women and 59 percent of men say that the quality of the first kiss can kill a relationship, Fisher said.

Kissing is a way of assessing our potential mates, but it's "just the tip of the iceberg," she said. "We're going to find that all kinds of chemical systems are in play in courtship that we are unaware of."

Psychologist Wendy Hill at Lafayette College in Pennsylvania is hot on the trail of those chemical systems. In a 2007 study, Hill and her team found interesting differences between the hormone levels of college-aged male-female couples who had kissed and those who had just held hands and listened to music for 15 minutes in a room in a student health center. Subjects were measured for their levels of cortisol, a stress-related hormone, and oxytocin, the bonding hormone involved in social recognition, male and female orgasm, and childbirth.

Cortisol (stress) levels decreased in men and women after kissing, but only men's oxytocin levels increased, while women's decreased.

Hill thought that the setting might have been too clinical for the women to get turned on, so she tried in her latest study to up the ambience by locating the couples in a secluded room of an academic building, outfitted with a couch, flowers, jazz music and electric candles.

This time, cortisol levels were found to plummet, post-kissing, in both men and women, Hill found, but the other hormone results are still being analyzed, she told a group of reporters today at the AAAS meeting.

Some anthropologists think that kissing originated as a way for mothers to transfer pre-chewed food to their children. In some non-Western societies, so-called pre-mastication is still common. This practice could have led to romantic kissing among adults. Others theorize that kissing started out as a gesture of fusion or union of souls.

Donald Lateiner, a history and classics professor at Ohio Wesleyan University who also spoke to reporters today at AAAS, has investigated who kissed whom and why and when in ancient Athens, Rome and nearby. In his work, he looked at depictions of romantic, familial and social kissing-up in poetry and prose, public and private art, including vase paintings, sculpture and mirror cases.

Kowtow kissing, or kissing to demonstrate deference to a social superior, was common in the Near East and became common again (along with kissing of appendages) in the later Roman Empire, Lateiner said.

"I have also found that there was an 'escalation of osculation' in the first century C.E. (A.D.)," Lateiner said. "There was also a kissing disease outbreak, what seems to be Mentagra [a pimply inflammation of the hair follicles, usually in the beard]."

Some of Lateiner's other findings in an analysis of Roman lyric poetry, epigrams and novels: "The Roman novels are slobbery."