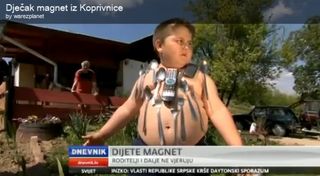 This isn't the first time a person has claimed to possess magnetic powers . In fact, just three months ago, a Serbian 7-year-old named Bogdan, to whom Ivan bears a striking resemblance, made headlines with claims of bodily magnetism. Are these boys human miracles?

This time, like last time, the answer is 'no'. According to Benjamin Radford, renowned skeptic and managing editor of the magazine Skeptical Inquirer, there are several clues in the videos as to what's really going on.

"A lot of times when you see these videos, the people are leaning back slightly," Radford told Life's Little Mysteries. "If there really is some magnetic attraction, the person should be able to lean over. If a magnetic force is overcoming gravity, we should see that. That's one strong clue that what we're seeing is not any sort of magnetism."

Second, a non-metallic remote control, as well as metal objects, are shown sticking to Ivan's chest. Plastic is not magnetic, Radford pointed out, so if plastic and metal are both sticking to Ivan, "what do those have in common? A very smooth surface. Not magnetism."

That shows that quite a different physical effect is at play. "These people aren't magnetic, it's just that things that have smooth surfaces stick to skin," said Radford, adding, "Often these magnetic people have smooth skin and hairless chests."

Young Ivan is quite devoid of chest hair.

According to Radford, scientists and paranormal skeptics have often tested alleged attractors to see whether they are generating magnetic fields, and they aren't. For example, Radford said, when a compass is hung around their necks, it doesn't point toward them, as it would if they were magnetic enough to attract spoons. Instead, it points due north to the Earth's magnetic pole.

The real question, then, is why smooth objects like spoons and dishes stick to some people's skin.

The Science of Stickiness

Sadie Crabtree of the James Randi Education Foundation (JREF), an organization that funds the scientific investigation of paranormal claims, said the effect is actually quite simple. "Skin is naturally slightly sticky, and some types of skin are probably stickier than others," Crabtree told Life's Little Mysteries. "But this is really no different than the trick where someone hangs a spoon from the end of their nose. It's just sticking through friction."

To find out what's happening on the scale of atoms, Life's Little Mysteries turned to Gabor Somorjai, a leading surface scientist and chemistry professor at University of California, Berkeley. Though three physicists contacted previously had no idea why spoons stick to noses, Somorjai described the effect as "very simple."

"Your skin is covered with grease and oils," he told us. "You can clean them off with soap , but within less than a minute it will again be covered with oils." The grease on your skin has a very low surface energy, due to the fact that it is a liquid. "Its atoms are only connected with weak bonds," he said.

By contrast, metals, with their strong, hard-to-break atomic bonds, have very high surface energies. "Things that have high surface energies want to go into a lower energy state. And so they want to be covered with a low surface-energy material," he said. And that means things like spoons stick to grease.

Furthermore, the smoother the spoon (or other object), and the larger its surface area, the more contact it will make with the skin, and so the more it will stick.

According to Elmar Kroner, a German materials scientist who has studied gecko feet, the elasticity of skin also affects its stickiness, and sweat makes it less elastic. "The sweat has a crucial function: With increasing wetness of the skin, its mechanical properties change. The skin becomes softer, and this reduces the elastically-stored energy of the skin and again leads to higher adhesion," Kroner told Life's Little Mysteries.

So sweaty skin is stickier. James Randi, the famous skeptic who founded the JREF, has in the past demonstrated that "magnetic" people's miraculous powers disperse when they are doused in talcum powder, a product that cuts grease.

The science suggests that Ivan is not magnetic, but rather just an exceptionally smooth, particularly sticky boy.