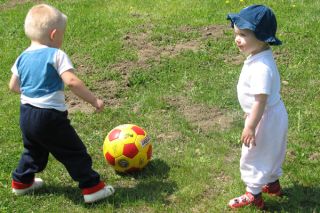 Baerke van der Meij can rip soccer ball after soccer ball into a small goal with pinpoint accuracy. He's so good at it, in fact, that after VVV soccer club saw his YouTube video, the club offered him a 10-year professional contract. There's nothing particularly unusual about such a deal, except that Baerke is just 18 months old.

The soccer club has admitted that the contract is just a publicity stunt, but is there any reason to believe that this tyke's ability might someday translate to real skills on the soccer pitch? Although the toddler's precise kicks are pretty impressive, experts suggest that they more likely indicate a quicker-than-usual developmental rate of his motor skills than whether or not he'll be good at soccer when he grows up.

"Children progress at different stages and there are different variabilities in each stage," Stewart Trost of Oregon State University's department of nutrition and exercise sciences told Life's Little Mysteries. "Some children's motor skills develop at a faster rate than others, but those other children eventually catch up as they mature and everything pretty much evens out."

"If a child is an early walker, it doesn't mean that he'll grow up to become a marathon champion," Trost added. "There's no such thing as gauging athletic ability in toddlers."

Other experts agree that advanced motor skills at 18 months don't mean that a kid is destined to become a professional athlete -- or even that he'll be better than his peers at kicking balls in 10 or 20 years.

"There are simply too many intervening variables between a toddler and athletic performance down the road," said Robert M. Malina, author of "The Manual of Physical Status and Performance in Childhood" and a researcher in the field of youth sports and children's physical maturation. "For example, what happens if the child does not have any interest in soccer?

Besides, Malina added, children generally begin to show promise in a particular sport during their elementary school years.

"You can't tell from an 18-month-old's behavior if he'll become a superior athlete," Trost said. "Even those who appear to be gifted at a sport from an early age, such as eight or nine, will very rarely go on to become superstar athletes."

Indeed, the team that signed the toddler -- the Venlose Voetbal Vereniging Venlo ( VVV-Venlo), a professional Dutch soccer club in Venlo in the Netherlands -- also seems aware of that. A VVV-Venlo press release made it clear that the contract is "symbolic," and it's unlikely that Baerke will one day play for the teamespecially since the boy "signed" it with a scribble .

The below video of Baerke was recorded by the child's father and uploaded onto YouTube on April 18, attracting more than 4 million views on YouTube.