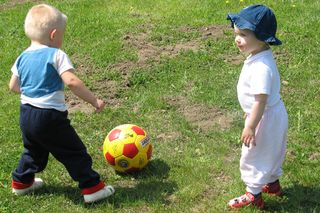 Until yesterday afternoon, the New York State Health Department was ready to declare whiffle ball, kickball and freeze tag too dangerous for kids to play at summer recreational programs without a medical professional present. But after outcry from some state lawmakers, the department has decided to reconsider its stance.

At first, the Health Department's list of games that pose a "significant risk to injury" — which also included horseshoes, capture-the-flag, dodgeball and most team sports — came with regulations: Any summer program offering two or more games or activities and at least one of those on the list must take all the same safety precautions as a full-fledged summer camp, including having a medical professional on staff, hiring a camp director with a bachelor's degree and 26 weeks of camp experience, and keeping detailed records.

State lawmakers, however, said the health officials went too far with the regulations, which they introduced to comply with a 2009 law on summer camp oversight, and that the regulations would put a lot of small, non-profit local recreation programs out of business. In response, Health Department officials plan to reassess their position, and focus more on potentially dangerous conditions rather than specific games. "There will be flexibility in how the law is implemented," department spokesperson Diane Mathis told the press yesterday (April 19).

Aside from the legal issues surrounding the Health Department's findings, there is the lingering question of whether or not its risk assessments are accurate. Are playground games like dodgeball and tag really dangerous?

"The games on the list — whiffle ball, dodgeball, tag — if they're run properly with the appropriate rules, they're not any more dangerous than any other sports," UNC's Groff told Life's Little Mysteries, a sister site to LiveScience.

If the risk is minimized, games such as these probably benefit kids' overall health. "The games you've listed are pretty good games for kids to engage in, and they don't seem risky," Groff, who has coached youth sports, said. "With the obesity epidemic as it is, kids need to be physically active, exercising and engaged." Children need 60 minutes of physical activity each day, she said.

Groff does advise employees of summer camps, day camps, and after school programs to have basic first aid and CPR training. "There's always a possibility they'll be dealing with injury."

Others point out that the risks involved on the playground can be minimized by teaching children how to play safely, rather than through government intervention.

A program along those lines comes from  Playworks, a national nonprofit organization hired by schools to provide safe, healthy and inclusive play and physical activity throughout the school day.

"Part of the danger during play is because kids don't know how to play certain games. No one is teaching them," said Calzet Liburd, the Playworks program director in Newark, N.J. "So they're coming up with their own ways based on what they see on TV or what they hear.

"What we try to do is not just teach them the game but also teach the skills to learn the meaning behind it. When we teach tag, we teach them the appropriate way to tag someone, like by touching the top of his or her shoulder," Liburd said. "You don't push, you use something called butterfly fingers."

Perhaps the New York Health Department should take a similarly gentle approach when resetting its guidelines.