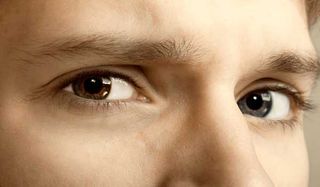 The instance of a person having two differently colored eyes is pretty uncommon, just 11 out of every 1,000 Americans. This uncanny trait is caused by several factors, and can actually develop over time.

Iris color develops during the first few months after birth, with the levels of the pigment melanin determining how dark eyes will become. The less melanin expressed in the iris, the lighter a person's eyes look, and vice versa.

Sometimes, though, the concentration and distribution of melanin isn't uniform, which leads to a condition known as heterochromia. This condition can present itself in different ways. There's complete heterochromia, when each eye is a distinctly different color, say, one blue and one brown. Central heterochromia is when the eyes show various colors, such as a blue iris with a golden-brown ring around the pupil. And sectoral heterochromia is when one iris has a splash of color that's different from its overall hue, a trait that actress Kate Bosworth has.

Eye pigmentation abnormalities are not necessarily a sign of an underlying health condition. This is known as simple heterochromia, and is generally inherited from a parent.

Heterochromia, however, is a common feature of several inherited genetic disorders. For example, Waardenburg syndrome causes children to experience hearing loss, prematurely graying hair and varying degrees of heterochromia. Another inherited disorder that lists heterochromia as a symptom is neurofibromatosis, which affects the nervous system and causes tumors to form on nerve tissue. Tumor formation inside the eye can cause heterochromia.

Irregular iris coloring can also be caused by an injury to the eye, such as a punch leading to bleeding within the eye. An infection or mild inflammation that affects only one eye can cause it, as can the presence of a foreign object in the eye, because that can lead to inflammation . Heterochromia can also be caused by glaucoma, which is a group of eye conditions that damage the nerve that carries visual information from the eye to the brain.

The sudden onset of heterochromia could be the sign of an underlying medical condition, and a complete eye exam should be conducted by an ophthalmologist to rule out any serious causes.