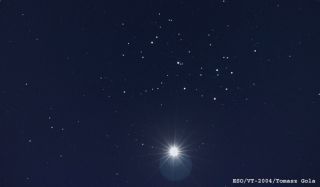 This image captures the beauty of Venus and the Pleiades. It was taken on April 2, 2004, in Poznan, Poland.

That glittering star topping your Christmas tree isn't there just to look pretty it represents the Star of Bethlehem, which glowed overhead when Jesus was born, according to the Bible. But some scientists believe the star was not a star at all, but three planets.

There are many theories as to what the Star of Bethlehem really was. Some believe it never existed, while others argue it could have been a nova . Other historians and astronomers say that it may have been a meteor or a comet that was mistaken for an ultra-bright star.

Of all the theories, "the most believable comes from the studies made by historians and astronomers," Dr. Donald E. Dossey wrote in his 1992 book, "Holiday Folklore, Phobias and Fun." "They conjure that, not in 1 A.D., but in the spring of 6 B.C., the planets Mars, Jupiter and Saturn were close together and formed a bright triangle known as Pisces that might have been the Star of Bethlehem."

Actually, Venus has been mistaken for many things, including UFOs . To skygazers, the second planet from the sun appears as a bright light that hangs in the sunset sky, seeming to slowly hover in the twilight as it outshines every star except for the sun.

Whatever astronomical events led to the Star of Bethlehem's formation, scientists, historians and astronomers will undoubtedly continue to try to solve the mystery of what made it appear if it did at all.