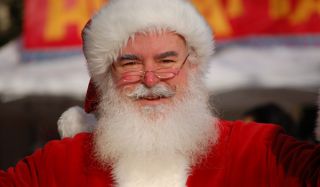 "Who ever heard of a skinny Santa?" Mrs. Claus asks in the Rudolph the Red Nosed Reindeer movie. Actually, the original Santa was rather slim, but cartoonists and commercial ads artists gave him a makeover.

The story of Santa Claus stems from a real man who started out as a monk and became the patron saint of children. He was known for his generosity and for discreetly helping the poor and unfortunate.

"The story of Santa Claus began with St. Nicholas, or Sinter Klaus," Pam Robson explains in her book, "How I Celebrate." "He was a kind bishop who lived in Asia Minor in AD 300. Children came to believe that he would reward them if they were good."

Santa goes by several names in different parts of the world and the way he's depicted varies, but in most countries he's shown as a somewhat heavy man in red. Several American artists played a role in turning the image of a slim saint in bishop's robes into a chubby, jolly old man in tall boots.

Thomas Nast, the famous cartoonist who drew for several publications, published the book "Thomas Nast's Christmas Drawings for the Human Race" in 1890, showcasing his many illustrations of Santa with a great big belly and fermenting that image among the American public.

The stylistic representation of Santa that is so widely recognized in the U.S. today with a fluffy white beard, giant belt buckle and bright red cheeks was further molded by none other than the Coca-Cola Co. In the 1920s, the company began to run magazine ads aimed at reminding people that Coca-Cola wasn't just a summer drink .

A December 1930 ad by artist Fred Mizen showed a department store Santa in a crowd drinking a bottle of Coke. A year later, the company chose an image of Santa designed by Haddon Sundblom to appear in a widespread magazine ad campaign . It did so well that Coca-Cola continued to use Sundblom's Santa illustrations for decades, and his wholesome representation of Santa that is both realistic and symbolic can still be glimpsed in current ads.