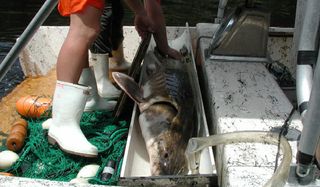 A beluga sturgeon caught in the Suwannee River, Fl., by U.S. Department of the Interior researchers.
(Image: © USGS.gov)

The largest freshwater fish in the world is the beluga sturgeon of Russia, according to the U.S. Geological Survey. These giants can grow to 15 feet long (4.5 meters) and weigh 2,500 pounds (1,133 kg), according to the Natural Resources Defense Council.

Beluga sturgeon are prized for their eggs, which are sold as caviar. Populations have shrunk dramatically due to high demand for the gourmet treat, and the species has been listed as endangered since 2004.

In North America, the largest freshwater fish is the white sturgeon, which lives in rivers in the Western U.S. and in Canada. Measuring up to 20 feet (6 meters) long and weighing up to 1,500 pounds (680 kg), these fish are also endangered. In 2005, fewer than 500 adults remained, according to the U.S. Fish and Wildlife Service.

The second largest freshwater fish in North America is the alligator gar, which lives in the Southeastern U.S. and in Mexico. They can weigh nearly 300 pounds (136 kg) and measure 10 feet (3 meters) long.

Got a question? Email us and Life's Little Mysteries will try to answer it. Due to the volume of questions, we unfortunately can't reply individually, but we will publish answers to the most intriguing questions, so check back.