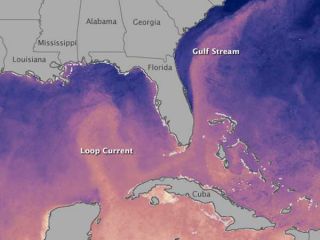 The Gulf of Mexico oil slick is approaching the Loop Current, a ribbon of ocean water that moves through the Gulf and into the Atlantic Ocean.

The Loop Current is a strong flow of warm water and is part of the Gulf Stream Current. It flows northward from the Caribbean Sea between Cuba and Mexico's Yucatán Peninsula, and then into the Gulf of Mexico, where it loops around clockwise before joining the Florida current and exiting the Gulf through the Florida Straits.

Scientists constantly monitor the current. As it flows along the sea surface, the National Oceanic and Atmospheric Administration's (NOAA) National Data Buoy Center records the flow's temperature about 3 feet (1 meter) the surface. The flow of the Loop Current is also precisely recorded from NASA satellites.

On May 18, images taken by NASA's MODIS satellite showed that a tendril of oil from the leak was close to the Loop Current. If oil enters the current, it will travel toward the Florida Keys and up the east coast of Florida.

If picked up by the current, satellite images suggest that oil could reach the coral reefs of the Florida Keys within six days, according to the European Space Agency. The Loop Current's powerful flow is largely driven by the winds across the Atlantic.

The proximity of the tendril of light oil to the Loop Current indicates the oil is increasingly likely to become entrained, said NOAA administrator Jane Lubchenco during a May 18 press conference.

But, Lubchenco said, not all of the leaked oil would reach Florida.

In the time it would take for oil to travel to the vicinity of the Loop Current, any oil would be highly weathered and the natural processes of evaporation and dispersion would reduce the oil volume significantly," Lubchenco said. "The oil would also be significantly diminished by ongoing chemical dispersant application.

While it is still too early to estimate the amount of oil that could reach Florida or what damage it could do to the fragile keys and beaches on Florida's Atlantic coast, NOAA has extended the boundaries of the closed fishing area in the Gulf into the northern portion of the Loop Current as a precautionary measure.

In order to ensure the seafood from the area surrounding the oil leak remain safe for consumers, the closed fishing area now spans across almost 19 percent of the Gulf of Mexico's federal waters, according to NOAA.