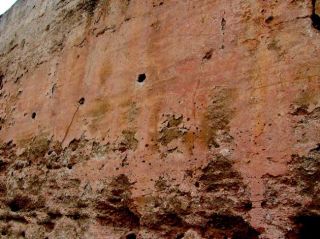 Scientists have found a 14th century oven used to bake animal bones for the purpose of strengthening the grand medieval walls in what today is Granada, Spain. This Moorish rampart, built by the Nasrid ruler Yusuf I, shows its aging patina. The wall has circular holes about 4 inches (10 cm) in diameter.
(Image: © American Chemical Society)

Scientists have discovered a 14th century brick oven made to bake animal bones for a strange purpose.

The burned bones were made into a powder, then mixed with other material to make a protective coating to strengthen the grand medieval walls of a Muslim structure in what is now Granada, Spain.

Decorative and protective layers, called patinas, cover the outsides of many buildings built by ancient civilizations. The ancients were quite the chemists. Ingredients often included lime or gypsum, plus quartz, feldspar or clay minerals. Iron oxides and hydroxides were added for color. Organic ingredients ranged from milk and eggs to oil and wax and even blood and urine, the researchers note.

The new study ties the oven's purpose with the patina on a wall.

"This is the first report of burnt bones in a patina on a Muslim monument, as well as the archaeological artifacts — the oven and raw materials — used to produce them," said study team member Carolina Cardell of the University of Granada.

Using a new method to identify the components of historical artifacts, the team found hydroxyapatite, the main component in bone pigments and animal bones, in the patina of Granada's medieval walls. Their new test is inexpensive, identifies chemicals more accurately and — most importantly — does not harm the historical artifacts.

The findings were detailed this week in the semi-monthly journal Analytical Chemistry.

Powdered burnt bone have been identified in patinas used in Greco-Latin, Celtic, and Medieval Christian monuments, the researcher write, "but never, to our knowledge, in Medieval Moorish constructions."