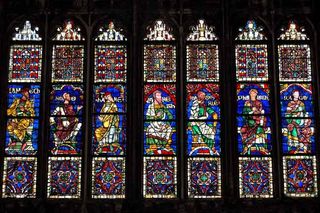 God and science are inherently at odds, or so goes the story with roots that reach back nearly 400 years to the Inquisition's trial of Galileo on suspicion of heresy.

The ongoing effort of U.S. creationists to inject doubt about evolution into science classrooms in public schools is an example of that conflict, not to mention the polarizing arguments over the decades offered by numerous members of the clergy, politicians, and some atheist scientists and scholars including Richard Dawkins.

Now a new study suggests our minds are conflicted, making it so we have trouble reconciling science and God because we unconsciously see these concepts as fundamentally opposed, at least when both are used to explain the beginning of life and the universe.

But what is the source of this seeming "irreconcilable difference" — are we hard-wired for it, or is it tenacious cultural baggage?

Experiments headed up by psychologist Jesse Preston of the University of Illinois at Urbana-Champaign and her colleague Nicholas Epley of the University of Chicago provide some data to support the argument that the conflict is inherent, or hard-wired. They found that subjects apparently cannot easily give positive evaluations to both God and science as explanations for big questions, such as the origin of life and the universe, at the same time.

In one experiment, 129 volunteers, mostly undergrads, read short summaries of the Big Bang theory and the Primordial Soup Hypothesis, a scientific theory of the origin of life.

Half of the group then read a statement explaining that the theories were strong and supported by the data. The other half read that the theories "raised more questions than they answered." All of the subjects then completed a computer task where they were required to categorize various words as positive or negative.

This is a standard experimental psychology approach designed to measure latent, or automatic, attitudes toward (or evaluations of) the priming word — in this case, God or science. Faster response times mean a closer association between two concepts, for example "science" and "great."

The results are detailed in the January issue of the Journal of Experimental Social Psychology. Financial support for the study was received from the National Science Foundation and the Social Sciences and Humanities Research Council of Canada.

Preston says her research shows that a dual belief system, for instance the idea that evolution explains biology but God set the process in motion, does not exist in our brains.

"We can only believe in one explanation at a time," she told LiveScience. "So although people can report explicitly, 'Look, I’ve been a Christian all my life, and yes, I also believe in science and I am a practicing chemist,' the question is, are these people really reconciling belief in God and science, or are they just believing in one thing at a time?"

When it comes to the ultimate questions, it's really just one thing at a time, Preston says. People rarely think about these problems, however, so most people live their lives without paying much attention to how the universe started or how life began, Preston said.

However, Hampshire College science historian Salman Hameed says Preston and Epley's framing of the issues and interpretation of their findings are bound up in a particular view of science and religion known as the "conflict thesis." Yes, sometimes particular scientific and religious claims conflict, but there are numerous examples of individuals, such as Isaac Newton, who saw no inherent conflict between their scientific and religious convictions, Hameed said. The experiment's results actually may reveal cultural forces — a specific way of thinking about science and religion — dating back to the 19th century, Hameed said, and these have shaped people's thinking about science and religion. "If society has been primed that science and religion have been in conflict, and that is the dominant narrative, then maybe all we are seeing is the effect of that priming, rather than the actual conflict," Hameed said. Society and journalists like conflict stories because they grab attention, but science and religion interactions are more complex and defy over-simplistic oppositional categories, he said. Preston agrees that there is a cultural opposition that we are all aware of, which may be a background context for her experiments, but she said religion and science have grown apart in the last few centuries because science developed theories that are inconsistent with doctrine. "To the extent that culture is the culmination of history — all our ideas, knowledge, and traditions — the opposition that grew between religion and science is a part of our culture," Preston said. "But it is part of the culture because the contradictions are well known, and become part of our knowledge structure. The concept of zero as a number is also part of our culture, for example. The cultural opposition we see between religion and science is not a superficial opposition like dog lovers vs. cat lovers." The history of the conflict Some historians trace the idea that science and religion are in conflict back to Cornell University's Andrew White and New York University's John William Draper, proponents of the professionalization of science who wrote books in the mid-1800s that claimed there was an inherent conflict between science and religion, citing the Galileo affair as the classic case. The affair led to the astronomer's house arrest on suspicion of heresy (not heresy itself), starting in 1633 until his death in 1642. Galileo argued that the Earth revolved around the sun, based in part on his telescope observations, counter to Church teaching that the Earth was the center of the universe. But science historians, including John Hedley Brooke, have questioned the conflict thesis, and others have poked big holes in simplistic interpretations of the Galileo story. For instance, some historians point out that Galileo, a practicing Catholic, didn't want to oppose the Church, but rather to update its views and prevent it from losing ground to Protestant scholars. Also, the Church ultimately sentenced Galileo, who had many political enemies in the church, on a technicality. Galileo redeemed Ultimately, Galileo has been mostly redeemed, thanks to the ongoing efforts of scientists and, in the end, some clergy. The International Year of Astronomy kicked off this month as a year-long celebration of astronomy timed to coincide, in part, with the 400th anniversary of the first recorded observations made by Galileo with a telescope.   In 2000, Pope John Paul II issued a formal apology for Church errors during the past 2,000 years, including the trial of Galileo. And in May of this year, according to the Associated Press, some Vatican officials will attend an international conference on the Galileo affair.