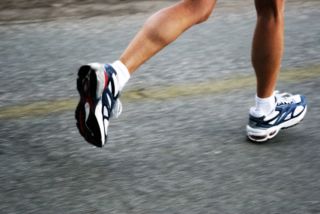 The Achilles tendon is involved in nearly every movement of the foot.
(Image: © Stockxpert)

The injury sustained to soccer star David Beckham's left foot had fans worried the athlete would miss the World Cup, but injuries to the Achilles tendon are no stranger to athletes and the less-conditioned "weekend warriors" alike.

The Achilles tendon is a band of fibrous tissue that connects the calf muscle to the heel bone, according to the Mayo Clinic. You use this tendon in practically every activity that involves moving your foot, from walking and running to jumping and standing on tip-toe. It's also the largest tendon in your body, and can withstand more than 1,000 pounds of force, according to the American Academy of Orthopedic Surgeons (AAOS).

Injuries can range from irritation to full on tears, or ruptures, of the tissue. While anyone who engages in activities that use the calf muscle can suffer an Achilles injury, they are most common in so-called "weekend warriors," people who aren't accustomed to regular exercise and might not take the time to properly stretch and warm up, according to the National Institutes of Health (NIH).

A number of actives can put stress on your Achilles and set off an injury, such as stair-climbing, hill-running or a sudden contraction of your calf muscle during a sprint, the AAOS says. The Achilles also tends to weaken with age.

A ruptured Achilles can sometimes feel like a snap in your lower leg accompanied by a sharp pain, akin to being kicked or even shot, the Mayo Clinic says.

Treatment for tears involves either wearing a cast or having surgery (as Beckham is reportedly having) to repair the tissue, along with rehabilitation. Most people can get back to their regular level of activity within four to six months, according to the Mayo Clinic.