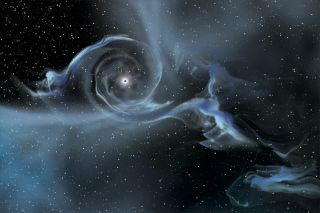 As a black hole sucks material from nearby objects (like this illustration showing the beast pulling gas from a companion star), its event horizon gets bigger.
(Image: © NASA E/PO, Sonoma State University, Aurore Simonnet)

If you believe the creations of science fiction, black holes serve as gateways to other worlds, either distant parts of this universe or other universes entirely. But the reality might be more complicated than that. And outside of the sci-fi realm, dropping into a black hole is a bad idea.

Even so, it turns out that people who enter a black hole would have at least a slight chance of escaping, either back into their own world or to some exotic place. This is because black holes actually bend space itself, and so could bring points that are ordinarily distant from each other much closer together.

An oft-used analogy is the bending of a piece of paper. If you draw a line on the paper, it follows the paper's shape and the line's length is unchanged by bending the paper. But if you go through the paper, the end points of the line are much closer to one another. Understanding this requires diving into Einstein's theory of relativity as applied to gravity. [5 Reasons We May Live in a Multiverse]

It's important to understand that a black hole is not empty space, but rather a place where an enormous amount of matter is shoved into a teensy, tiny area, called a singularity. In fact, the singularity is infinitely small and dense. (There's actually some debate among scientists on this point, but more on that in a minute.)

Since nothing can go faster than light, that means nothing can escape a black hole. But there's a loophole: A black hole doesn't suck up everything around it, like a vacuum cleaner or a bathtub drain. Its power extends only as far as the black hole's event horizon, whose radius is the distance from the center of a black hole beyond which nothing can get out. That radius gets bigger as more matter falls into the dense beast. Perhaps it's better to think of a back hole as a ball whose surface allows matter to pass inside, but never the other way.

What's inside that surface is one of the biggest mysteries in astrophysics. Remember that most scientists think a black hole is a singularity. All the matter from whatever originally supplied the black hole's mass (a star, for example) gets crushed into a point that has infinite density. If you were to fall into a black hole, the usual description of such an event says that you would first get stretched into spaghetti by tidal forces, then crushed into nothingness. Your matter would then add to the radius of the black hole's event horizon.

Eventually you'd be emitted as Hawking radiation. Physicist Stephen Hawking's calculations showed that black holes give off photons. In doing so, the black holes lose mass, because according to Einstein's famous E = mc^2 equation, energy and mass are equivalent. Black holes eventually evaporate, but you would be waiting around a long time for that to happen. [8 Ways You Can See Einstein's Theory of Relativity in Real Life]

A black hole with the mass of the sun — by cosmic standards that's a small one — takes on the order of 10^87 years to evaporate and turn into a burst of gamma-rays. The universe is about 14 billion years old, or 1.4 x 10^9 years. There's some debate in the scientific community about how long it takes for a black hole to evaporate, because the Hawking radiation doesn't preserve any information about the stuff that fell into the black hole in the first place; but the fact remains that being emitted as radiation is still not good.

There might be a better way out of a black hole, though: Gravity bends space. (Think of a sumo wrestler rolling on a mat, indenting the mat with his weight.) Any object creates a local "gravity well." That well gets deeper toward the center of the object. A planet, for example, has a gravity well, but as you go toward the center of a planetary sphere, the well flattens out. Using the mat analogy, any normal object would have a well shaped like a depression with a finite depth.

Black holes don't behave like normal objects … perhaps fortunate for the trapped individual. The curvature of space just keeps going up and up until you reach the singularity at the center of the black hole, where that curvature is infinite. Instead of a depression, you just have a hole whose sides get steeper as you go toward the center, until they are basically vertical and space is shaped like an infinitely stretched dimple.

And that's why it's a mystery. Scientists use Einstein's theory of relativity to describe the curving of space, but Einstein's equations start to break down in the singularities of black holes. These singularities are also very small, and at that point, one should see quantum mechanical effects. However, nobody has worked out a way to make quantum mechanical theory work with gravity, to figure out what a singularity might look like.

It gets even weirder when you realize that black holes aren't static. Realistically, any object in space tends to rotate. That means the singularity could, if it rotates fast enough, becomes a ring, rather than a point. A ring singularity could provide a gateway to other universes (as in the 1994 sci-fi novel "Ring," by Stephen Baxter, published by HarperCollins). So a black hole could be a wormhole, a gateway through space and time.

However, the concept of a ring singularity as a gateway is far from a sure thing. First, nobody knows how a ring singularity would come into existence. The other problem is that whenever people have tried to work out the mathematics of a black-hole-made wormhole, they run into problems of keeping the gateway stable. "In any realistic construction, they are still considered wildly unstable to anything that we'd consider regular matter," said Robert McNees, an associate professor of physics at Loyola University Chicago. Previous work by other theorists seems to show that the only potential way to make wormholes is to be with what's called "exotic matter," matter with negative mass. But there's no clear idea what that would mean.

Which brings up the fundamental problem: While most scientists say black holes can be wormholes, "Without a theory of quantum gravity, such questions are hard to answer conclusively," McNees said.

The other issue is that nobody has observed stuff coming out of nowhere, as one would expect if black holes could be gateways to other universes. After all, something would get through, even if by accident. One set of theories even proposes that black holes start whole other universes, causing other "Big Bangs" — and our own universe was one — but that idea is still controversial.

And last, one implication of black holes as gateways is time travel. Because of relativity, there's no such thing as "now" that applies everywhere in the universe. "Instant" travel from point A to point B anywhere in the universe would also involve time travel, and you could end up arriving somewhere before you left. Physicist Stephen Hawking noted that since no one sees time travelers today (at least that's been reported) it seems unlikely that time travel is even possible in our universe; that would point to black holes being less useful as wormhole generators.

So while it's possible black holes could be gateways, it's probably a good bet that they aren't.

Update: This story was updated to correct units for the speed of light.