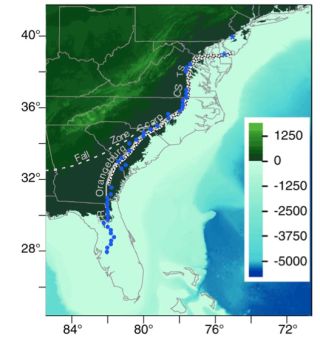 The East Coast shoreline as it appeared 3 million years ago. The shoreline has been adjusted 82 feet (25 meters) relative to today.
(Image: © David Rowley/Science Express)

A prehistoric shoreline runs along the eastern edge of North America; scientists have pointed to it as evidence that much of Antarctica melted 3 million years ago. But new research suggests this shoreline is actually about 30 feet (10 meters) lower than previously thought, meaning less ice melted than suspected.

The shoreline, which should be flat, also swoops up and down the East Coast like a set of wave crests, reflecting tugging and pushing by Earth's mantle, the layer of viscous rock leisurely oozing underneath the crust, according to the study, published today (May 16) in the journal Science Express.

The finding shows that scientists have to be careful when looking at Earth for evidence of past sea level changes from the planet's cycles of glacial advance and retreat.

"You simply can't go somewhere and look at the height of the shoreline and infer anything about the amount of water in the oceans or the height of sea level without already knowing an awful lot about what the mantle is doing," said David Rowley, lead study author and a geologist at the University of Chicago.

This interplay between the surface elevation of the Earth and the mantle is called dynamic topography. The cliffs of the Great Australian Bight and the tall height of the African continent are also attributed to the mantle's effects on topography. Even the Appalachian Mountains may owe their enduring height to the mantle.

Past sea-level changes leave a record on land, in the form of shorelines carved by waves when sea level was higher. Researchers are searching every continent for this 3-million-year-old coastline to predict future sea level rise. The coastline's height can indicate how much of Greenland and Antarctica melted in the mid-Pliocene, when average global sea-surface temperatures were about 3.6 to 5.2 degrees Fahrenheit (2 to 3 degrees Celsius) warmer and atmospheric concentrations of carbon dioxide — the dominant greenhouse gas in Earth's atmosphere — were comparable to those measured in 2011.

Based on the height of shorelines found so far, as well as other geologic evidence, many scientists think that Greenland, West Antarctica and even the massive East Antarctic Ice Sheet melted during the mid-Pliocene warm period.

But Rowley's lower estimate means East Antarctica was untouched by melting, he said. More importantly, scientists seeking to model past climate from prehistoric coastlines need to consider changes wrought by the mantle in their calculations, he said.

"The height of sea level in the past is being deformed and distorted," Rowley told OurAmazingPlanet.

The mantle distorts the crust because some parts are more cold and dense, and pull on the surface, and others are hotter and more buoyant, giving the crust a boost. "The surface is sort of a magic carpet riding on the mantle, which is telling the surface to either go up or down," Rowley said. For instance, a cold blob depresses Georgia and a hot lump lifts the mid-Atlantic's Chesapeake Bay.

The warped shoreline, called the Orangeburg Scarp, was shifted as much as 196 feet (60 m) by the mantle, the researchers found. The team used a computer model to account for the mantle effects on topography, as well as changes from piles of sediments building up offshore and glaciers retreating in the North.

Evidence for the mantle's imprint on the East Coast goes back even further, according to a study published online May 11 in the journal Earth and Planetary Science Letters.

The Appalachian mountain range was formed between 325 million to 260 million years ago. There hasn't been any significant tectonic activity in the region since then — the East Coast is what's called a passive margin, with no boundary between two of Earth's tectonic plates.[In Images: How North America Grew As a Continent]

But about 15 million years ago, streams started cutting steeply back into the range in the Susquehanna River basin, in the Northeast. The rivers incised more than 300 feet (100 m). The simplest explanation for the uplift that triggered the erosion is dynamic topography, said Scott Miller, lead study author and a geomorphologist at the University of Michigan in Ann Arbor.

"There's no such thing as a passive margin," Miller said. "If you go to every passive margin in the world, there's likely some contribution from dynamic topography."