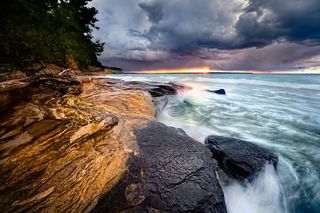 The Pictured Rocks National Lakeshore in Michigan. This was one of the winning photographs from the 2012 "Share the Experience" competition, of photos from public lands around the U.S.
(Image: © Steve Perry / U.S. Department of the Interior)

The U.S. Department of the Interior wants YOUR amazing images of America's public lands.

The department has announced the beginning of a photo contest that is open to all amateur photographers who have taken photos from a national park, wildlife refuge, forest, recreation area or other public land.

Called the "Share the Experience" photo contest, the winner could get $15,000, as well as other prizes, and have their photo prominently used by the department, for example, on the 2015 America the Beautiful pass. The contest began on May 10 and continues until Dec. 31, 2013, and applicants can upload photos at www.sharetheexperience.org. Entrants must be amateur photographers, meaning  they do not earn more than 20 percent of their income from photography.

"Photography has the power to make the great outdoors accessible so that we all can see some of the most beautiful places in the world through the eyes of people like Ansel Adams," said Sally Jewell, secretary of the Interior, in a statement from the department. "This is a fun competition that helps strengthen the connection between Americans and their public lands, and I look forward to seeing the submissions from across the country."

Winners from the 2012 contest included a photo of a black bear napping on a tree branch in the Great Smoky Mountains, a view from a camper's tent at Bridger-Teton National Forest and a Navajo dream catcher at Grand Canyon National Park.