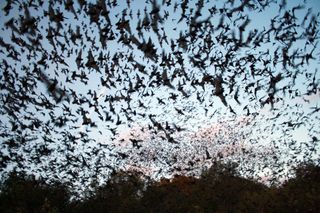 Halloween has come and gone, but for Alabama's Fern Cave National Wildlife Refuge, some night stalkers will be hanging around through the winter.

Between 800,000 to 1 million gray bats winter at Fern Cave, located in the northeastern part of the state near Huntsville. Fern Cave is the largest known hibernation cave for this species, which thrives in the southeastern United States. Scientists also suspect some 1 million Indiana bats — a medium-sized mouse-eared bat native to North America — also winter here.

Alabama is just batty for bats, with some 300,000 gray bats also roosting nearby in the Sauta Cave National Wildlife Refuge.

Bats get a bad wrap as the shape-shifting creatures of vampire lore, but only three species of bats suck blood. Most eat insects — small bats can eat up to 2,000 insects every night, keeping crops healthy.

About 30 percent of bat species eat fruit, pollen or nectar. A number of popular foods need bats for pollination, including bananas, dates, coconuts, cloves, vanilla, Brazil nuts and avocados. A Halloween staple — chocolate — also depends on bats, which spread seeds for the nuts, figs, allspice and cacao from which chocolate is made. Fruit bats eat the cacao fruit and discard the bean, which grows into a new tree.

There are more than 1,100 species of bats and they can be found on every continent except Antarctica.