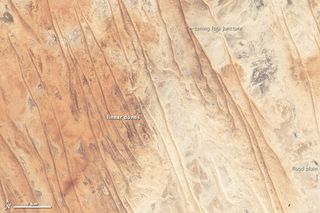 Linear sand dunes are a defining feature of Australia's Simpson Desert, seen here in an image taken by NASA's Earth-Observing 1 (EO-1) satellite on May 20, 2004.
(Image: © NASA)

Australia is an extreme continent, with the Simpson Desert being a perfect example of just how extreme it can be.

The 140,000-square-kilometer (54,000-square-mile) desert, located in a large drainage basin in central Australia, is one of the driest regions on the continent, according to a NASA release.

But the desert does see water, and when it does, it can see a lot of it: Torrential rainstorms and flash floods occasionally spread huge sheets of water across the landscape.

Some of the defining features of the Simpson Desert were caught in an image taken by NASA's Earth-Observing 1 (EO-1) satellite on May 20, 2004, that shows the desert's eastern edge.

Long, red, linear sand dunes are seen throughout the desert, sometimes stretching in unbroken chains for hundreds of kilometers, according to NASA. The dunes form parallel to the direction of the prevailing winds.

In the center of the desert, these dunes are packed tightly together, with as many as 15 per kilometer. This is thanks to the dried-out lakebeds that provide abundant sand to build up the dunes. But in the area that the satellite took a picture of, there are only a few dunes per kilometer. The main source of sand there is Diamantina River, a tributary of Lake Eyre.

Sands in the Simpson Desert range from brilliant white to dark red, with a range or pinks and oranges in between. Two main factors affect the color: the distance the sand has moved from its source, and the proximity to river channels that flood regularly.

The lightest-colored sands are usually closest to the source. As it ages, sand develops a red sheen because a layer of hematite forms on the surface of the grains. The presence of water in floodplains mixes light-colored sands into the environment, reducing the redness of dunes near drainage basins.

And though this area looks dry in the satellite image and only receives about 10 inches (250 milliliters) of rain a year, it is part of an area of Queensland known for ephemeral rivers and flash floods called the Channel Country, according to NASA. The waters come when monsoonal rains dump water on areas hundreds of kilometers away that courses through the river channels cut into the desert; the influx of water can quickly green this barren desert.