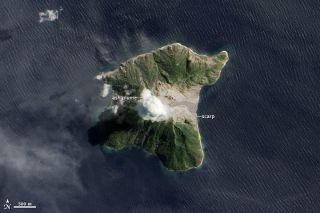 The Advanced Land Imager (ALI) aboard the Earth Observing-1 (EO-1) satellite captured an ash plume from one of the frequent eruptions of Indonesia's remote Batu Tara volcano on Aug. 15, 2012.
(Image: © NASA)

The volcano, called Batu Tara, is located on the island of Pulau Komba, and has been experiencing frequent, mild eruptions since mid-2006, according to a NASA release.

While much of the island appears green thanks to tropical vegetation, one side of the island is noticeably free of plants and appears grayish. This barren area is a scarp that drops from the summit of the volcano to the ocean, a distance of 2,454 feet (748 meters). The scarp is created by the frequent eruptions, which send rocks and ash barreling down the slope.

The volcanic island is located in the Flores Sea and is part of the Lesser Sunda Islands. The first recorded eruption of the volcano, which happened from 1847-52, produced explosions and lava flows, according to the Smithsonian Global Volcanism Program.

Batu Tara is a stratovolcano and the frequent eruptions is has experience recently are called Strombolian, after the archetypal Stromboli volcano in Italy. Strombolian eruptions are intermittent and feature explosive activity and lava fountaining, sometimes sending so-called "volcano bombs" into the air. Stromboli even has a scarp, called the Sciara del Fuoco, that resembles the one on Batu Tara.