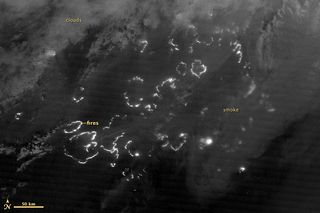 A satellite captured eerie images of wildfires burning through the night in the far reaches of Siberia, a region regularly racked by massive burns during the summer months.

Satellites have been able to spy wildfires for years by searching out heat anomalies along the surface of the Earth, but an instrument aboard the Suomi National Polar-Orbiting Partnership satellite actually can spot the glow of fires at night in the visible spectrum, as shown in an image captured on Aug. 3.

In the black-and-white photograph, the landscape is peppered with glowing lines that resemble the simple shapes of clouds one might see in a child's drawing ? the outlines of burns that officials say cover up to 90 square miles (233 square kilometers) of eastern Siberia, but that actually may be far more widespread.

The current wildfires don't appear to be threatening populated areas, unlike in the summer of 2010, when an oppressive heat wave and drought unleashed a rash of massive burns that sent flames as far as the outskirts of Moscow.

A recent study linked those fires, along with the spate of hot summer weather that has dogged the United States in recent decades, to human-induced global warming.

This year it is the United States that is in the grip of an unusually damaging fire season. Wildfires swept through portions of Colorado Springs in June, burning hundreds of houses to the ground, and recent wildfires in Oklahoma killed at least one person and left dozens homeless.

A map of U.S. wildfires since 2001 offers support for what researchers describe as an increase in wildfires in recent decades, a trend that has been seen around the world.