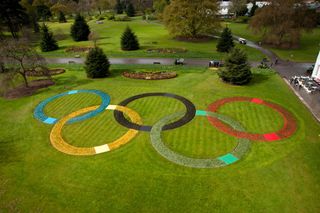 The Olympic Rings are rendered in a variety of colorful flowers at London's Royal Botanic Gardens, Kew.
(Image: © RBG Kew)

London's famed Kew Gardens is celebrating the 2012 Summer Olympics with a unique take on the iconic Olympics rings — plants in each of the ring's five colors.

The rings were initial planted by Kew staff and volunteers to mark 100-day countdown to the beginning of the games and were unveiled in May. As the games grew closer, the rings were re-planted with new species:

The vivid display served as a backdrop when the Olympic torch relay passed through the gardens on July 24, Day 67 of the relay.

Officially known as the Royal Botanic Gardens, Kew, the organization conducts research worldwide and promotes conservation. It began the Millennium Seed Bank, where they hope to gather seeds from 25 percent of the world's plants by 2020 to keep the world from losing many plants facing extinction.