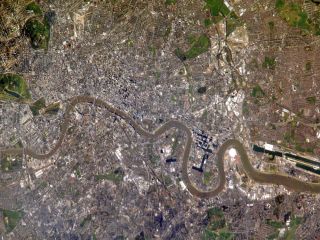 London, photographed by an astronaut aboard the International Space Station on April 2, 2005.
(Image: © NASA)

The famous London landmarks that are serving as a backdrop during the 2012 Summer Olympics have also been seen by astronauts in space.

From a position over northern Germany and looking back at Britain, an astronaut aboard the International Space Station snapped a photo of London on April 2, 2005. (Satellites have also snapped pictures of London and its lights at night.)

In the picture can be seen open green patches that are some of the city's most famous parks, including Regent’s Park, Hyde Park and St. James’s Park east of Buckingham Palace (which can also be seen and is shown in an inset close-up).

The River Thames, the lifeblood around which the city grew up, winds its way across the picture. Its many bridges can be seen spanning its waters.

The area of the City of London, which corresponds to the original Roman walled city of Londinium, sits along the northern bank of the Thames. It is where the famous St. Paul's Cathedral is situated. (For scale, the Thames is about 870 feet, or 265 meters, wide near St. Paul's.)

On the opposite bank is the City of Westminster, where the center of government is. The Houses of Parliament and the Prime Minister's house at 10 Downing Street are located there.

Other large structures that can be seen in the image include several of London's rail stations, including Waterloo Station.

Many of these places were also passed during the torch relay before the London Olympics began.