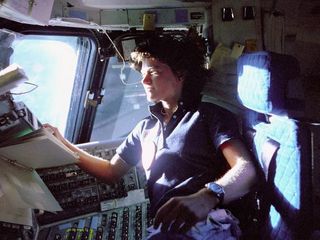 In June 1983, NASA astronaut Sally Ride became the first U.S. woman in space when she launched on the STS-7 mission of the space shuttle Challenger.
(Image: © NASA)

When we think of explorers, we tend to think of names like Christopher Columbus and James Cook — in other words, mostly of men.

But many women have put their stamp on the exploration of the globe — and beyond.

These fearless females have adventured and discovered the globe, and have inspired others to follow in their footsteps. Read on to find out more about the most influential female explorers of all time.

A story of exploration doesn't have to be recent to be inspirational: Gudridur, who lived in the 900s in Iceland, is known mostly from Icelandic sagas.

Gudridur was taken by her father to the colony on Greenland, founded by Erik the Red, where she married Erik's son. Together with her husband, she joined the expedition west of Greenland to a place called Vinland, now known to be North America. They made it to Vinland, but her husband died on the return trip.

With her next husband, she spent two years colonizing the New World — a feat documented in the Greenland Saga. The influential Icelander traveled to many places in her time, eventually becoming a nun and ending life as a hermit in Greenland.

Born Elizabeth Cochran in 1864, Nellie Bly got a pen name when she convinced a newspaper editor to give her a job — the same job he offered to her thinking she was a man. Bly prevailed, and began to write investigative stories about the plight of female factory workers.

In 1887, the inspirational young journalist took an undercover assignmentfor which she agreed to feign insanity to investigate reports of brutality and neglect at the Women's Lunatic Asylum on Blackwell's Island. The next year, she attempted to take a trip around the world, an effort to turn the fictional "Around the World in Eighty Days"into fact for the first time.

Bly completed her 24,899-mile (40,071-kilometer) journey in 72 days, the fastest such trip at the time. On her travels around the world, Bly went through England, France, the Suez Canal, Sri Lanka, the Straits Settlements of Penang, Singapore, Hong Kong and Japan. The development of efficient submarine cable networks and the electric telegraph allowed Bly to send short progress reports, though longer dispatches had to travel by regular post and were thus often delayed by several weeks.

In pop culture, the creator of Superman modeled Lois Lane on the type of reporter that Bly was.

Ride joined NASA in 1978 after responding to a newspaper advertisement and in 1983 became the first American woman—and then-youngest American, at 32—to enter space. On shuttle mission STS-7, Ride was the first woman to use the robot arm in space and the first to use the arm to retrieve a satellite. She has spent more than a total of 343 hours in space.

Ride had completed eight months of training for her third flight when the Space Shuttle Challenger accident occurred. She was named to the Presidential Commission investigating the accident, and headed its subcommittee on operations. Following the investigation, Ride was assigned to NASA headquarters where she led NASA's first strategic planning effort.

More recently, Ride founded a company in 2001 to create entertaining science programs and publications for upper elementary and middle school students, with a particular focus on girls.

Ruth Harkness was a New York socialite who changed the conservation of giant pandas.

She was a New York fashion designer who married a wealthy adventurer who wanted to bring back a panda back to the United States. He died before he could accomplish this goal, so Ruth traveled to China to finish her husband's quest.

In 1936, Harkness traveled to Shanghai, and with the help of a Chinese-American explorer and a British naturalist, launched her own panda mission. After passing through Chongqing and Chengdu, the team arrived at a mountainous region, where they encountered and captured a nine-week-old panda cub. The panda, which they named Su Lin after Young's sister-in-law, was bottle-fed baby formula on the journey back to Shanghai and the United States. The panda caused a great sensation in the American press and eventually ended up at the Brookfield Zoo in Chicago.

The first panda kept outside of China, Su Lin survived only two years in Chicago, but Harkness's adventure marked the beginning of an extensive series of pandas going abroad from China. Harkness succeeded where 12 professionally-led trips to China had failed previously, and she ushered in a new era of panda conservation.

The New York Times has called Kira Salak a real-life Lara Croft. At the age of 24, trained as a writer, Salak took a year off graduate school to backpack around Papua New Guinea and became the first woman to cross the country (following the route taken by British explorer Ivan Champion in 1927).

Salak now writes regularly for National Geographic Adventure and other magazines about her travels to places including Iran, Rwanda, Libya, Burma, Borneo, Uganda and Peru.

In 2003, she convinced some Ukrainian gun-runners to fly her to the war-ravaged east of the Democratic Republic of the Congo. Salak stayed in the Congolese town of Bunia, which was taken over by child soldiers, and was witness to some of the worst atrocities of war.

Salak has gained a reputation for being a tough woman adventurer, surviving war zones, coup attempts and life-threatening bouts of malaria and cholera— and above all, telling difficult stories. She is one of the toughest and most influential living explorers.

In South Dakota in 1990, Hendrickson found a remarkable T. rex fossil, the most complete skeleton to date. The fossil is displayed in the Field Museum in Chicago, and bears the name Sue, after its discoverer. Hendrickson has also found important fossils, artifacts and shipwrecks around the world, including ancient fossilized whales in the Peruvian desert, 24-million-year-old amber-encased butterflies and other insects in the Dominican Republic, ancient Egyptian and Napoleonic treasures sunken in the Alexandria River in Egypt, and Chinese porcelain and other treasures from a 400-year-old sunken Spanish galleon off the coast of the Philippines. Though she never went to college, the University of Chicago granted her an honorary PhD in 2000.

Mae Carol Jemison was the first African-American woman in space.

Jemison is a medical doctor and a surgeon with engineering experience. She was accepted into NASA's astronaut program in 1987. She flew on the space shuttle Endeavor (STS-47, Spacelab-J) as a Mission Specialist, spending eight days in space.

Jemison was fascinated by science as a small girl, and studied pus — that's right, pus — for a school project. In addition to her native English, Dr. Jemison speaks fluent Russian, Japanese and Swahili, and she has appeared on an episode of "Star Trek: The Next Generation."

After leaving NASA, Jemison founded the International Science Camp in Chicago in 1994; it is a program designed to interest children in science and space. Jemison has practiced medicine in Western Africa and founded the Jemison Group to research and develop technology. Currently, Jemison is spearheading an audacious 100-Year Starship plan to send mankind on an interstellar adventure.

Sacagawea is one of the ultimate female explorers: She not only covered vast distances, but also brought together cultures and made it possible for others to explore deep into a new world.

She was a Lemhi Shoshone woman who was the interpreter and guide for the Lewis and Clark Expedition that explored the western United States. Together with the expedition team, Sacagawea traveled thousands of miles from North Dakota to the Pacific Ocean between 1804 and 1806.

Captured as a child by a rival tribe, she ended up marrying a French trader and joining the expedition. While Sacagawea did not speak English, she spoke Shoshone and Hidatsa. Her husband Charbonneau spoke Hidatsa and French. In effect, Sacagawea and Charbonneau would become an intepreter team.

Sacagawea turned out to be incredibly valuable to the Lewis and Clark expedition as it traveled westward, through the territories of many new tribes. Some of these Indians, prepared to defend their lands, had never seen white men before. As Clark noted in his journal, the Indians were inclined to believe that the whites were friendly when they saw Sacagawea. A war party never traveled with a woman, especially a woman with a baby. During council meetings between Indian chiefs and the expedition where Shoshone was spoken, Sacagawea was used and valued as an interpreter.When the trip was over, Sacagawea received nothing, but Charbonneau was given $500.33 and 320 acres of land.