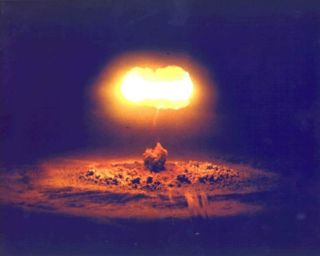 The Stokes atmospheric nuclear test was conducted at the Nevada Test Site on August 7, 1957. The tests was conducted as part the operation "Plumbbob" testing events. Stokes produced 9 kilotons and was exploded from a balloon.
(Image: © Nevada Division of Environmental Protection)

Riots in the United States will begin before Christmas as a result of Barack Obama winning the presidential election. The old, hard-line Soviet guard will jump on the opportunity and nuke us, killing 100 million people or more.

So goes the prophecy of Leland Freeborn of Parowan, Utah, known by a small group of followers as the Parowan Prophet.

Freeborn, a survivalist who keeps iodine handy in order to ward off the effects of radiation, admits to issuing inaccurate doomsday prophecies before. It's not an exact science, he allows.

Among the successful predictions Freeborn claims to have made: O.J. Simpson's murder acquittal and Al Gore's winning of the popular vote in 2000, he told King.

King describes Freeborn: "A Mormon of substance, a father of 12, he had crashed his airplane in 1975 and fallen into a three-week coma, during which he went through 'to the other side' and emerged a prophet."

Failed doomsday predictions are nothing new. As LiveScience's Bad Science columnist Ben Radford points out: "There have been thousands of people predicting the imminent end of the world, dating back to at least 2800 B.C. They have all been wrong." Radford has written extensively about people who claim to predict the future. He says the predictions are often rooted in Bible passages, as seems to be the case with Freeborn, or often the source is misunderstood astronomy or plain old schizophrenia.

All that in mind, you can test Freeborn's prophecy at home: Simply see if you're alive come Christmas morning.

If you make it, start getting ready for 2012, when the whole world is expected to end, according to cult leader Wayne Bent, who ought to have a better line on future events, being the son of God and all. But Bent, too, has got it wrong before, currently outliving his last end-of-the-world prognostication by more than a year.