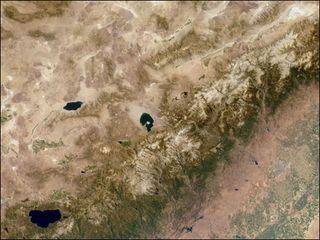 If it's true that a lady never reveals her age, then the Sierra Nevada mountain range, with its rich wilderness and snow-capped peaks rising above California and Nevada, is quite the lady. Researchers still don't know exactly how or when those rocky summits got there.

Now, new research has uncovered a clue in this geologic puzzle. Using GPS and space radar technology, scientists found that the range — which includes Lake Tahoe and the highest peak in the contiguous United States, the 14,505-foot-tall (4,421 meters) Mount Whitney — is growing by about a millimeter each year. At this rate, the entire Sierra Nevada could have been built in just the last 3 million years, the researchers say.

"There's a surprisingly wide variety of opinions about how and why the Sierra Nevada goes up, and about the ages and timing of all the events that contribute to the uplift," said William Hammond, a geophysicist at the University of Nevada, Reno, who led the study. "These findings suggest that whatever mechanism is at play, it's acting on the entire range."

That's a big difference, Hammond said, because it means the mountains are either very old and no longer growing, or they're quite young and still growing at a measurable rate.

In this radar technique, a satellite whizzes over the Earth and uses microwave energy to take snapshots of features like mountain ranges and earthquake faults. The satellite then revisits the same spot every month or so to take more microwave snapshots. Because it can monitor large swaths of landscape over long periods of time, InSAR data is particularly useful for measuring slow and steady changes in the shape of the Earth's surface.

"Most of the seismic cycle is made up of periods of time where the Earth is not shaking, but it is deforming," Hammond told OurAmazingPlanet. "We're getting better at measuring that slow shape change as a way of understanding, for example, where the Earth might break in future earthquakes."

His team analyzed 18 years of Sierra Nevada InSAR images, along with precise measurements from GPS stations, to zero in on a growth rate of about 0.04 to 0.08 inches (1-2 millimeters) per year for the mountains.

How did the mountains get there?

Exactly how the Sierra Nevada range was built is still a mystery, though, and theories abound.

The mountains lie just west of the Basin and Range Province in Nevada, where east-west tectonic forces are in the process of ripping the Earth's crust apart. Some geologists think this stretching might be causing the eastern side of the Sierra Nevada to grow upwards.

Another idea comes from seismologists, who believe they see a weighty blob in the Earth's mantle that may have been attached to the base of the Sierra Nevada tectonic block. They think this dense blob used to weigh the block down, like a keel on the bottom of a ship. Then, sometime between 3 million and 10 million years ago, this keel peeled off and sank down deeper into the Earth, and the Sierra Nevada block popped up.

Whichever it was, Hammond's team found that the process affected nearly the entire range — from Lake Tahoe to the Mojave Desert — and is still building up the Sierra Nevada today.

The team's findings were published on April 27 in the journal Geology.