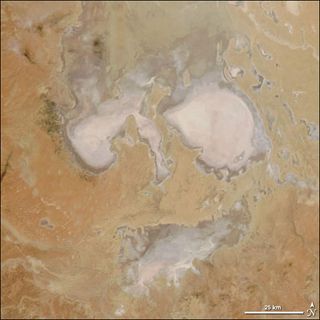 In this NASA satellite image, the shape of a ghostly face appears to be peering up from South Australia's Tirari Desert.

The pale, skeletal-like features are produced by salt deposits in the basin of Lake Eyre, a usually dry salt lake in the lowlands of central South Australia. The lake is the lowest point in Australia, sitting about 56 feet (17 meters) below sea level.

When rains fall, temporary rivers and streams -- collectively called Channel Country -- flow through surrounding deserts into the interior lowland region , carrying in salty, marine sediments that were laid down in the region in the distant past.

Lake Eyre is filled by the streams only rarely; it has filled only three times in the 20th century, most recently in 1989.

Usually the lake, like other dry lakes, is a source of dust storms and is probably the largest source of airborne dust in the Southern Hemisphere, according to a NASA statement.

The image of the dry lake was taken by the Moderate Resolution Imaging Spectroradiometer (MODIS) instrument on NASA's Aqua satellite on Oct. 29, 2006.