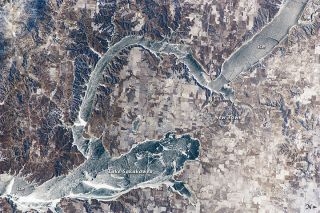 While winter has seemed like a no-show for most of the country, North Dakota's Lake Sakakawea is certainly seeing its effects: Ice covers the surface of the lake in this photo snapped by an astronaut aboard the International Space Station, demonstrating the harsh conditions experienced during winter in this region.

A local weather station near New Town, N.D., reported an air temperature of minus 11 degrees Fahrenheit (minus 24 degrees Celsius), with a wind chill of approximately minus 25 F (minus 32 C) at 10:36 a.m. local time — six minutes before the image was taken. [Coldest Places on Earth ]

In addition to the grey ice on the lake, a dusting of white snow highlights the agricultural fields to the north and northeast, as well as fissures and irregularities in the ice surfaces.

For scale, the arms of the lake to either side of New Town are approximately 6 miles (10 kilometers) apart.

Lake Sakakawea is named for the Shoshone woman generally known as Sacagawea, or "Bird Woman" and comes from the Hidatsa language. From 1805 –1806, she accompanied the Lewis and Clark Expedition as an interpreter and guide, according to a NASA statement.

The lake was created in 1954 following the completion of Garrison Dam on the Missouri River. With a surface area of approximately 368,000 acres (148,924 hectares) and length of 178 miles (286 km), Lake Sakakawea is one of the largest artificial reservoirs in the United States.