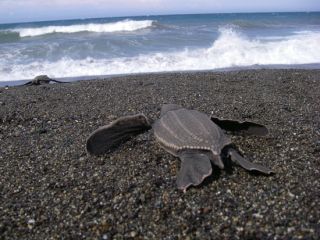 A baby leatherback turtle heads out to sea.
(Image: © NOAA.)

VANCOUVER, British Columbia — From loggerhead turtles to sea urchins, marine life is benefiting from the giant amount of data being taken from new systems that can follow sea creatures, marine scientists say.

Biologging, the tracking of animals using electronic tags, enables researchers to better understand animals' movements and survival and is providing new tools for improved ocean management, including the design of marine protected areas.

Those tags used to be as big as a brick, but now are tiny. They can stay attached to creatures for longer and relay more and better information to researchers back on land, scientists said here at the annual meeting of the American Association for the Advancement of Science last weekend.

"As it turned out, the fishermen didn't realize they were having a global-scale effect. They didn't even know the turtles were endangered," Crowder said.

After the tags identified the problem, the scientists worked with the fishermen to find a solution: switching to hook-and-line fishing.

More good news is on the way for turtles: A month ago, the National Oceanographic and Atmospheric Administration designated 42,000 square miles (109,000 square kilometers) as critical habitat for pacific leatherbacks — habitat delineated and backed up by data from satellite tracking.

Information from tagging and logging species may be the most helpful of all in protecting marine animal habitat by creating international protected zones.

Right now, some 20,000 tuna are fished out of the ocean every 15 minutes, said Jeff Ardron, director of the High Seas Program at the Marine Conservation Biology Institute.

Gathering accurate data about marine life numbers is particularly important because unlike terrestrial creatures they move up and down in the water column and can be difficult to locate.

Marine protected areas, which currently make up 1.7 percent of the ocean, are making a difference, say the experts. One problem with them in the future may be the effect of warming on oceans — making a static protected area won't help if fish are expanding their ranges northward at around 3 miles (5 km) per year to remain in a comfortable temperature range.

"Marine protected areas have worked, but networks work better," Crowder said. Those areas may have to shift annually or seasonally, which could create headaches for fishermen looking to catch around the edges of the areas.

Part of the problem with the way that humans view the sea is historical. Historical laws of the sea mandated that they would be free for all.

"It was a system based on trade and commerce, not on conservation, which said that fish and air are free," Ardron said. He added that the outcome after hundreds of years of this point of view is the destruction of the seafloor that is "worse than all the clear-cutting on Earth times 10."

Data will help do what needs to be done. "For very complicated problems, sometimes just trying stuff is the best thing we can do," Ardron said.