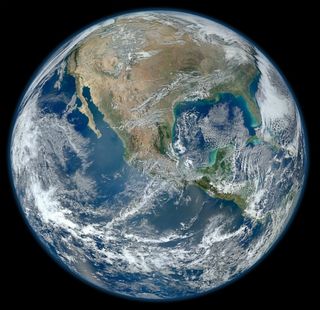 NASA's newest Earth-watching satellite has sent back a breathtaking image of our "Blue Marble" that offers a taste of the orbiting observatory's vast capabilities.

The image release comes just a day after the satellite was given a new name: Suomi NPP, named for the late meteorologist Verner E. Suomi, a scientist hailed as the father of satellite meteorology.

Previously, the satellite was known simply as NPP, an acronym for a mouthful: the National Polar-orbiting Operational Environmental Satellite System Preparatory Project.

The new name was announced Tuesday (Jan. 24), at the annual meeting of the American Meteorological Society in New Orleans.

Suomi NPP is equipped to do far more than provide Earthlings with some stunning views of their home planet. Five instruments are traveling aboard the first-of-its-kind satellite, designed to improve both short-term weather forecasts and the overall understanding of long-term climate change.

In addition, the technology aboard is designed to monitor natural disasters, from volcanic eruptionsto wildfires to floods.

The portrait above was compiled from images taken on multiple passes of the planet Jan. 4. It joins other spectacular images of our home planet, including the iconic one taken by the crew of Apollo 17 in 1972 — one of the most widely distributed images in history — and views taken by retreating space probes such as Voyagers 1 and 2.

NASA launched the satellite Oct. 28, 2011, from Vandenberg Air Force Base in California.

The mini-van-sized satellite is designed to operate through the end of 2016.