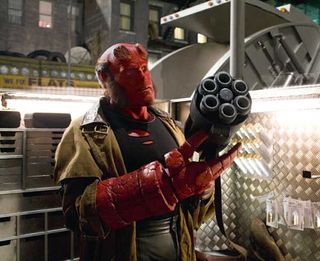 A 38-year-old man in Springfield, Ohio, told police he was reaching for something on the nightstand during sex when his pistol went off and shot his estranged wife in the chest, according to a local news report. Timothy Havens previously served 60 days in jail for assaulting Carolyn Havens, 42, who is now in the hospital.

The shooting comes just a handful of days after NFL player Plaxico Burress accidentally shot himself in the thigh in a Manhattan nightclub.

While the Burress incident made big headlines, Carolyn Havens' tragedy is a far more common affair in this country where people shoot themselves or other family members far more frequently than many realize. A quick scan of headlines just this week finds:

The standard argument for keeping guns in the home is that they keep you safe, of course. The National Rifle Association trains about 750,000 gun owners a year. NRA courses teach proper handling and storage of firearms. Yet far more people who own guns — including many who see the guns as useful for self defense — never get such training.

There are somewhere between 193 million and 250 million guns in the United States, according to the Brady Campaign (in 1981, during the attempted assassination of President Ronald Reagan, Press Secretary Jim Brady was shot and seriously wounded).

Studies show that, statistically speaking, a gun in the home is more dangerous than protective. Some facts, according to the Brady Campaign:

There's a loaded gun in 10 percent of households with children; and there's a gun that's hidden but not locked away in one in every eight family homes. Not surprisingly, a study last year found that homicide rates are highest in states where more households have guns. Topping that list: Wyoming, Alaska and Montana.

"Our findings suggest that in the United States, household firearms may be an important source of guns used to kill children, women and men, both on the street and in their homes," said the lead researcher of that study, Matthew Miller of the Harvard School of Public Health.

We Americans, it seems, have a penchant for doing ourselves harm.

One other little-known fact: The odds of dying in an assault by firearm in this country are 1-in-325, less than suicide (1-in-121). And neither of those can compare to the odds of being killed on the road (1-in-100). All these methods of dying are in the top 8 overall (accidental injury is even higher).

This article is from the LiveScience Water Cooler: What people are talking about in the world of science and beyond.