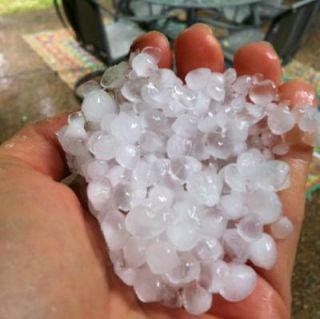 Climate change could make summertime hail in the eastern Rocky Mountains nothing but a memory by the year 2070, according to a new study.

Yet although humans and plants might not miss the annual icy barrage, researchers say the disappearance of hail could heighten the risk of floods in the area.

"In this region of elevated terrain, hail may lessen the risk of flooding because it takes a while to melt," Kelly Mahoney, lead author of a study published this week in the journal Nature Climate Change, said in a statement.

Mahoney, a postdoctoral scientist at the National Oceanic and Atmospheric Administration's Earth System Research Laboratory in Boulder, Colo., said a shift from hail to rain can mean more runoff, which could raise the risk of flash floods.

Mahoney and her colleagues used computer models to try to understand how climate change might affect hail-producing weather patterns across Colorado.

The research focused on storms involving relatively small hailstones (up to pea size) on Colorado's Front Range, a region that stretches from the foothill communities of Colorado Springs, Denver and Fort Collins up to the Continental Divide.

The study didn't examine effects on the state's most damaging hailstorms — those with large hailstones — that tend to occur farther east.

In the summer on the Front Range, precipitation above an elevation of 7,500 feet (2,290 meters) commonly falls as hail. Officials and others concerned about the safety of mountain dams and flood risk have been interested in how climate change may affect the amount and nature of precipitation in the region.

To explore that question, Mahoney and her colleagues used two existing climate models, adjusted to reflect the relatively small study area, that assume levels of climate-warming greenhouse gases will continue to increase in the future. Carbon dioxide, for example, which is at about 390 parts per million today, increases in the model to 620 ppm by 2070.

Parts per million is a unit often used to quantify extremely low concentrations of a given substance in a larger solution — in this case, the atmosphere. Now, out of every million molecules in the atmosphere, 390 of them are carbon dioxide molecules.

"We found a near elimination of hail at the surface," Mahoney said.

The team checked their results for the future — the years 2041 through 2070 — by using their same models to reconstruct hailstorms in the past, using data from the years 1971 to 2000. Their results checked out.

The research team also found evidence that extreme precipitation events across all of Colorado may become more extreme in the future, while changes in hail patterns may depend on hailstone size — results that are being explored in more detail in ongoing work.