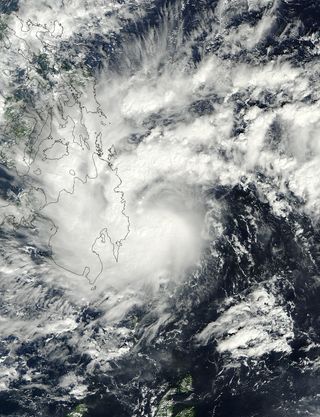 NASA's Terra satellite flew over Tropical Storm Washi on Dec. 16 at 01:45 UTC and captured this visible image of the storm. The western half of Washi was already over Minandao in the southern Philippines.
(Image: © NASA Goddard MODIS Rapid Response Team.)

Early Dec. 15 when NASA's Tropical Rainfall Measuring Mission (TRMM) satellite passed over the storm, it detected an area of heavy rainfall in the southwest portion of the storm. By the time the satellite circled back later that day, the heavy rainfall had become more widespread.

TRMM detected rain falling at rates of 2 inches (50 mm) per hour in the east, north and western quadrants of the storm. The rainfall analysis showed that Washi was much better organized than in previous days, with bands of thunderstorms spiraling into the center of the storm.

The typhoon dumped a month's worth of rain in just 12 hours, according to The Los Angeles Times.

On Dec. 16, NASA's Terra satellite flew over Washi as the storm was already over Mindanao in the southern Philippines. Mindanao is the second-largest and easternmost island of the Philippines.

Mindanao was one of the hardest-hit parts of the country as the torrential rains created flash floods that washed away houses and people.

Illegal logging and mining contributed to the damage, the LA Times quoted officials as saying, because it leaves soil more susceptible to being washed away by rains.