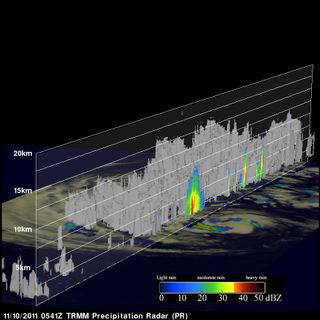 Tropical Storm Sean dumped rain over Bermuda as it passed by yesterday (Nov. 10), and a NASA satellite was able to see a 3-D cross-section of the storm and its rain as it flew overhead.

"TRMM's Precipitation Radar (PR) data were used to show a 3-D cross section through Sean.," said Hal Pierce of the TRMM science team from SSAI at NASA's Goddard Space Flight Center in Greenbelt, Md. "TRMM's PR revealed that heights of storms in the edge of Sean's center of circulation were reaching to about 11 kilometers (6.8 miles). "

Hurricane hunters also flew through Sean yesterday to get a better sense of its strength.

TRMM data was also used to create a "top down" satellite view or rainfall, that showed those high storms in Sean's northwestern quadrant were the most powerful where rainfall was occurring at a rate of more than 2 inches (5 centimeters) per hour. The rest of Sean contained mostly scattered moderate to occasionally heavy rainfall.

Sean is moving northeast and is expected to weaken as it hits conflicting upper atmosphere winds that will shear off its top.

Tropical Storm Sean is the 18th named storm of the 2011 Atlantic hurricane season, which was predicted to have between 14 to 19 named storms.