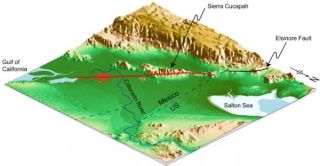 This 3-D view of the surface rupture of the April 4, 2010, El Mayor-Cucapah earthquake (red line) reveals a new fault line connecting the Gulf of California with the Elsinore fault.
(Image: © Caltech Tectonics Observatory.)

Fault lines that run across the Earth are usually more complicated at the Earth's surface than they are deeper down. But a new study of an April 2010 earthquake in Mexico reveals a reversal of this trend: While the fault involved in the event appeared to be superficially straight, the fault zone is warped and complicated at depth.

The El Mayorâ??Cucapah earthquake happened along a system of faults that run from Southern California into Mexico and form part of the boundary between the Pacific plate and the North American plate.

In a standard model, such faults where two plates slide past one another tend to be vertically oriented. However, it turns out that despite the somewhat straight line left on the Earth's surface, the portion of the fault that ruptured in the April quake is jagged and angled at depth.

"It was really surprising to see a straight fault trace that cuts through the Colorado delta and the rugged topography of the Sierra Cucapah as a result of this event," said Jean-Philippe Avouac, director of California Institute of Technology's Tectonics Observatory, in a statement.

Avouac was principal investigator on the study, which is published online in the journal Nature Geoscience.

The team used radar data and optical images gathered from satellites, global positioning system (GPS) data, and seismological data to study the rupture process. By combining the various types of data, the researchers were able to produce an extremely detailed model of the earthquake.

The model shows the earthquake broke erratically along the fault line. In addition, the quake revealed the presence of an unknown fault.

"High-resolution satellite radar images allowed us to locate a previously unmapped fault the Indiviso Fault beneath the Colorado River Delta that had been buried by river sediments since its last earthquake," said geophysicist Eric Fielding of NASA's Jet Propulsion Laboratory (JPL), who was a co-author of the study, in a statement.

Lead author Shengji Wei, a Caltech postdoctoral scholar in geophysics, said that since the new analysis indicates the responsible fault is more segmented deep down than its straight surface trace suggests, the evolution and extent of this earthquake's rupture could not have been accurately anticipated from the surface geology alone.