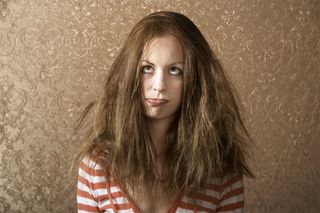 Those wiry extensions scattered about our bodies and concentrated on the head evolved from our reptilian and avian ancestors.
(Image: © dreamstime.)

Having a bad hair day? You're excused. After all, hair has its origins in stuff that used to make just claws. Research now suggests that hair of all kinds extends much further back into evolutionary time, with birds and reptiles having genes for hair proteins.

Scientists previously had thought hair was just a mammalian thing, with its evolution cropping up after the mammalian lineage split from the reptilian lineage. The first mammals arose on Earth about 210 million years ago. Humans, birds and reptiles have a common ancestor that goes back some 300 million years, said researcher Leopold Eckhart of the Medical University of Vienna in Austria.

Turns out, the common ancestor of reptiles and mammals likely had genes for making keratin proteins, the building blocks of hair, though these proteins were used for claws not hair.

The research is based on genetic sequences of a chicken and a lizard, representing the bird and reptile lineages, respectively.

"Our results suggest these components, the hair keratins, had an original role in the claws," Eckhart told LiveScience. "We think this common ancestor of reptiles and mammals formed claws, and these claws were made of these keratins, which only later in mammals acquired an additional role in forming hair."

Our hair also is mostly made up of keratin proteins, and so are our nails. So to figure out where our hair came from ancestrally, Eckhart and his colleagues looked for hair-keratin genes in the genomes of a chicken and a lizard, mammals' close relatives. They found one human-like keratin gene in the chicken and six such match-ups in the lizard.

The study suggests that hair keratins evolved first in our bird and reptile ancestors. In the case of the anole lizard, the hair-keratin genes were used for forming claws and possibly their body scales.

The researchers aren't sure about the function of the keratin gene in chickens.

The research is detailed this week in the journal Proceedings of the National Academy of Sciences.