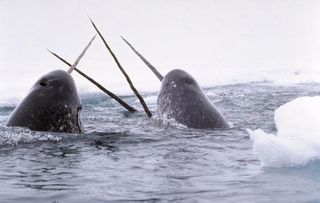 A team of scientists is setting off this week to navigate the frigid waters between Greenland and Canada in an attempt to catch the earliest glimpse ever of the migration of Arctic whales beluga, bowhead and narwhals, the iconic, tusked "unicorns of the sea."

"There's very little information on these animals at this time of the year," said Kristin Westdal, marine biologist for the Pew Environment Group's Oceans North Canada, the group behind the investigation of Arctic whales.

"From all the research we could find, we couldn't find any boats that have gone up to this area this early," Westdal told OurAmazingPlanet.

And for good reason. Baffin Bay , which stretches between the coasts of Canada and Greenland and where narwhals spend the winter months, is choked with floating sea ice . As much as 90 percent of the water surface is covered in ice in the winter.

"They're there for food, first and foremost," Westdal said.

The icy waters are not only rich with Greenland halibut, narwhals' favored snack, but scientists suspect all the floating ice provides a measure of protection from humans (through subsistence hunting) and killer whales.

The eight-member expedition is scheduled to sail in the next few days from the small Greenland town of Ilulissat aboard the Arctic Endeavor, a 45-foot trawler outfitted with an extra cabin so everyone on board can squeeze around a single table together at mealtime.

The monthlong voyage will take the team north along the coast of Greenland and then swing west toward Canada and Lancaster Sound, the eastern entrance to the Northwest Passage.

Westdal said she hopes to catch the whales before the ice melts too much, and the region's thousands of belugas, bowheads and narwhals head west through paths of open water to their summering grounds.

Narwhals are of particular interest to Westdal. Although they're relatively small as far as whales go, reaching a maximum length of around 15 feet (5 meters), narwhals sport strange tusks, a single tooth that can reach about two-thirds of their body length up to 10 feet (3 meters) long.

In addition, the whales make some of the deepest dives of any whales, plunging down to 3,280 feet (1,000 meters) in search of fish.

However, population numbers and the wintertime habits of the cold-loving species remain mysterious.

"There are not a lot of data out there," Westdal said, "so all the science leading up to today is very minimal."