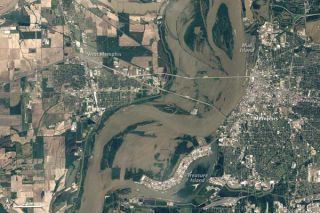 The bulge of excess water clogging the Mississippi River has been flowing along its march southward, threatening and flooding town after town.

The flooding is due to a combination of issues , from excess April rainfall, the geology of the Mississippi basin and human interference, from paved towns to levees.

On May 10, the river reached 47.87 feet (14.59 meters) in Memphis, Tenn., as measured by the Advanced Hydrological Prediction Service (AHPS) of the U.S. National Weather Service.

The Thematic Mapper on the Landsat 5 satellite snapped images of the flooding at Memphis (shown above), which can be compared to an image from about a year earlier taken during non-flooding conditions (below). [Images: Before & After the 2011 Mississippi Floods ]

The flooding this year saw muddy waters push over the Mississippi's banks to the east and west of the normal river channel. Flood waters span the distance between Memphis and West Memphis, and also fill a floodplain extending to an industrial park northwest of Treasure Island.

Although flooding has not yet caused major damage in Memphis, the possibility of another rise on the Mississippi has not been ruled out, and flood waters are expected to recede slowly. The AHPS projected that the Mississippi River would remain at major flood stage until at least May 15.

Vicksburg, Miss., is currently the next town awaiting the crest of the Mississippi. The U.S. Army Corps of Engineers will likely open a spillway in Louisiana to keep floodwaters from threatening New Orleans and other cities, according to news reports.

The Mississippi River Basin is the third largest in the world, after the Amazon and Congo. Managing floods along the river has challenged engineers for more than a century. As of May 10, 2011, the AHPS reported major flooding along the Mississippi from Cairo, Illinois, to Baton Rouge, Louisiana. Springtime flooding also plagued other parts of the continental United States, including areas along the Red River and in New England.